A question never answered(correctly) by the left!

Patriotguy said:
So a forming human got it!
Click to expand...

That's not what it says. It could be any mammal that gives birth to live young.

Patriotguy said:
She gave consent when She agreed to sex, next!
Click to expand...

Incorrect. Consent to pregnancy is not agreement to carry to term any resulting pregnancy.

Patriotguy said:
It is a developmental stage of humans, when anything else but a human is developing we can talk! Maybe we should call them pup[pies y'all would lose your mind if anyone tried harm a puppy!
Click to expand...

Actually, people do get abortions for their dogs. I don't see anyone howling about that.

Location
Lower Mainland of BC

BirdinHand said:
Last I read, the cost of a surrogate is solidly $40K above that. (Likely because of medical costs for all the prenatal appointments, delivery, etc)

A man could easily find a surrogate that wants to be pregnant and compensate her for the matter…instead of trying to force one that doesn’t want to be pregnant to carry one to term for him.

Which brings us back to abortion not being about men WANTING a baby or about the medical science…but about control.
Click to expand...

Patriotguy said:
The terms you are using, are simply terms to ease the guilt of killing babies, by scientists and doctors who benefit from said abortion, big business!
She still didn't do it by herself, even a little bit, epic fail!
Click to expand...

Patriotguy said:
Epic fail, for the Lord knows you even before you were formed in the mothers womb!
If you don't care move along!
Click to expand...

That means God knows you before there was a zygote. God's being spiritual, that makes sense.
C

Patriotguy said:
Not reason enough to enumerate women with a special right while the father get none! No one forced either party to engage in behavior that would cause the pregnancy! They knew the risk!
Click to expand...

Patriotguy said:
The right to terminate life, so if the mother wants to keep it, and tha father wants no part, can he then kill it, try to be consistent, I mean if no harm comes to the mother during the assassination of the child by the father.
Click to expand...

Abortion isn't about "terminating life." It is about the removal of an embryo/fetus from attachment inside of the woman's body. She is not obligated to give it part of her life.

Once the Child is born, they have equal responsibility to raise the baby

Patriotguy said:
If a man, and a woman agree to consensual sex, and she gets pregnant, why, when the child is equally the mans, does he not get equal protection under the law, lets keep it scientific shall we, leave your emotion next to the tissues. WHY DOES HE NOT RECEIVE EQUAL RIGHTS
Click to expand...

If by answer correctly you mean they don't give the answer you want to hear, then you are already committing a bias fallacy.

The only time that they do not have equal rights is when someone misrepresents those rights. For example, the claim that a biological mother has the right to terminate her offspring before birth. I already proved that wrong by showing that it has nothing to do with the offspring itself, but whether or not it is in her body. Which means in turn that the surrogate can choose to abort the offspring at any time, and she will not receive a legal punishment for it. For a breech of contract, sure, but that is a separate issue from the abortion itself.

Patriotguy said:
SCIENCE! That child cannot be made without the sperm, from one of the legally consenting adults. But thank you for providing evidence that it is unequal protection!
Click to expand...

Patriotguy said:
The overall load is irrelevant, both parties engaged in consensual sex, that child is equally a part of him regardless of who carries it. When you speak of overall burden or load it is an emotional plea to give women a special right to murder! You can dress that crap up all you want with semantics like, healthcare, and burden, fact is he is not equally protected.
Click to expand...

It's not murder. That is right-wing religious dogma.

Until the fetus is viable, it is a mass of cells. In New York State, it's not considered a child until it takes its first breath.

The right has been unwilling to accept that their religious bullshit is not the law. The renders the right incapable of properly discharging the duties required of those who hold public office.

This is what the right wing says about rape: 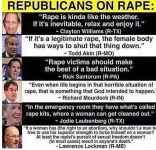 ColdHardTruth said:
The right has been unwilling to accept that their religious bullshit is not the law. The renders the right incapable of properly discharging the duties required of those who hold public office.
Click to expand...

Exactly. I would go further and say not only are they unwilling to accept that much of what they claim about abortion is not the law, but it is also not biologically accurate, biblically true, culturally accepted or socially rational. The fact is that they are not running for office in order to discharge duties of the office, they are there to change US law, American culture and the constitutional command of freedom of religion. This is a crowd that is seeking to create a theocracy.
You must log in or register to reply here.
Share:
Facebook Twitter Reddit WhatsApp Share Link
Top Bottom