The White House has readied a plan to oust embattled Secretary of State Rex Tillerson and replace him with CIA Director Mike Pompeo, who has become one of the most personally loyal and politically savvy members of President Trump's national security team, two administration officials confirmed Thursday.

The plan, hatched by White House chief of staff John F. Kelly, is expected to be set in motion over the next few weeks, and has broad support within Trump's inner circle, the officials said. But it was unclear whether Trump had signed off on the plan yet, and the president has been known to change his mind about personnel and other matters before finalizing decisions with public announcements.

Under the plan, Pompeo would likely be replaced at the CIA by Sen. Tom Cotton (R-Ark.), one of Trump's most steadfast defenders and a confidant to some leading members of the foreign policy team, according to the officials, who spoke on the condition of anonymity because the White House has not publicly announced the moves. White House spokesmen did not immediately comment.
Click to expand...

it is CLEAR to me & it should be clear to all, OUR current government is Hellbent on becoming a militant terrorist organization ala Hitler 1930's Germany .......

cuban smokes said:
it is CLEAR to me & it should be clear to all, OUR current government is Hellbent on becoming a militant terrorist organization ala Hitler 1930's Germany .......
Click to expand...

You have them confused with ANTIFA and BLM.

Yeah, everything is just fine... 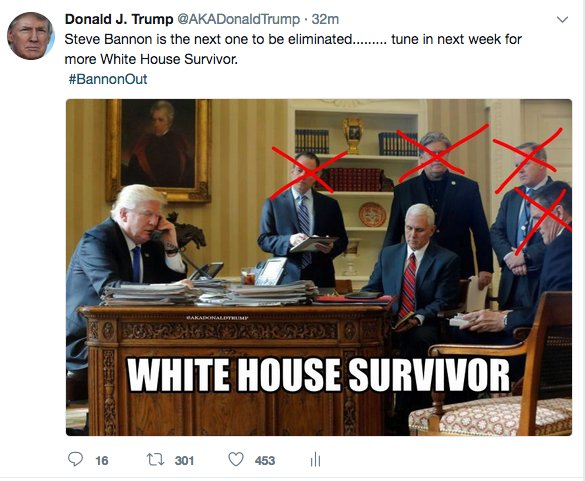 WCH said:
You have them confused with ANTIFA and BLM.
Click to expand...

I'd go back and check out Obama's first term before making any hay over this.

Rex "Trump is a moron" Tillerson is gone. Around the first of the year. Others want out also and John Kelly is debating whether all should go at once or space them out a bit.

WCH said:
I'd go back and check out Obama's first term before making any hay over this.
Click to expand...

Let's see your list. There has never been this much chaos in the White House in our entire history.

Moreover, even our British allies, our special relationship allies, had to condemn our president for tweeting out religious hate. This White is an unprecedented catastrophe. But everything is fine for you.


The hope from the White House, the source said, is to push out the plan to replace Tillerson and then "wait for him to punch out."
Click to expand...

Remember when Trump called WaPo fake news when they reported about Tillerson wanting to leave? The Washington Post was right again.

I hope Tillerson talks to the media about what an enormous moron Trump really is and how he's a danger to the country.
D

cuban smokes said:
it is CLEAR to me & it should be clear to all, OUR current government is Hellbent on becoming a militant terrorist organization ala Hitler 1930's Germany .......
Click to expand...

I don't think the current administration has the metal, constitution or resolve or be that devious to duplicate Weimar Republic...


they are more like bunch of monkeys throwing feces at each other. Sadly the rest of are getting splattered with the pieces.