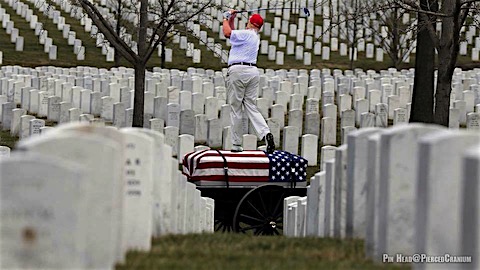 In Donald Trump's world, these are the grave markers of "losers and suckers".

9/5/20
At the end of James Michener’s Korean War novel, “The Bridges at Toko-Ri,” an admiral notes the bravery of aviators who are flying perilous missions against the enemy. “Where do we get such men?” he asks. Apparently President Trump wonders the same thing — but not in a complimentary way. The Atlantic’s editor in chief, Jeffrey Goldberg, quotes Trump telling aides that the men and women who have given their lives for their country were “suckers” and “losers.” “I don’t get it. What was in it for them?” he reportedly asked his then-homeland security secretary, retired Marine Gen. John F. Kelly, as the two stood by the grave of Kelly’s son, who was killed in Afghanistan. The Atlantic report clearly stung. Witness Trump’s frenzied denials; he even called in the first lady to defend him. But a president who has lied or deceived more than 20,000 times has no credibility — and his defense quickly fell apart. Trump denied having called the late Sen. John McCain a “loser,” yet he did so in 2015. The Atlantic report was confirmed in short order by the Associated Press, The Post and — the cruelest blow — even by Fox News. He has erased every red line, and none of it seems to matter to his base. He entered office with 45.5% approval in the FiveThirtyEight poll of polls. Today he stands at 43.5%. Nearly four years of craziness — and his numbers have barely budged.

Why do Trump supporters even go through the motions of trying to discredit the latest allegations? Their support hasn’t been shaken by all of the other things the president has done. He has welcomed Russian election help; called white supremacists “very fine people”; put children in cages; gotten impeached for trying to blackmail an ally into helping him politically; kowtowed to Vladimir Putin and avowed his love for Kim Jong Un; unleashed security forces on peaceful protesters; fomented violence; espoused insane conspiracy theories; refused to say that he would accept the election results; and, most recently, urged his fans to vote twice in violation of the law. He has erased every red line, and none of it seems to matter to his base. He entered office with 45.5 percent approval in the FiveThirtyEight poll of polls. Today he stands at 43.5 percent. Nearly four years of craziness — and his numbers have barely budged. Alexander Hamilton called “Party-Spirit” the “most fatal disease” in “governments of the popular kind.” That disease is ravaging America: Were it not for Party-Spirit, Trump could have been impeached and removed before he had a chance to mismanage the coronavirus. And now Party-Spirit is likely to inoculate Trump from the political fallout of his insults to our military. Truly this is, as the kids would say, the “LOL nothing matters” presidency.
Click to expand...

If such a creature as Donald Trump can actually win a second term, America is truly lost.

I’ve had this ongoing argument for the last couple of years with some in my circle. My take is this:

I have no concern that Trump is toast. None. Because if he’s not, and that’s who we are as a country, it is what it is. Sad to contemplate but nothing lasts forever.

A republic if you can keep it and all that.

Why do Trump supporters even go through the motions of trying to discredit the latest allegations?
Click to expand...

Good question. Lord knows the country has seen so much of this kind of nonsense from the media. I'm guessing the people are just getting tired of it all.

Rogue Valley...get yourself geared up to get out and scream into the night sky again.

As I’ve said before, these things matter. They just don’t have the direct sort of impact you’re used to. Polls like these don’t come out of a vacuum, and his behavior is why he’s the underdog even as an incumbent. 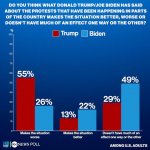 Since Vietnam, and maybe even Korea before, anti military sentiment has largely come from the left so I’m skeptical of a lot of the outrage now.

X Factor said:
Since Vietnam, and maybe even Korea before, anti military sentiment has largely come from the left so I’m skeptical of a lot of the outrage now.
Click to expand...

You're clearly stuck on the mythos of hippies spitting on returning Viet Nam soldiers and you've never recovered from that. Just one little problem: there's no evidence it happened. Your entire belief system of anti-soldier sentiment from the left is made up, so now all you're left with is the fact that the President you support is the one who despises our soldiers.

"The Spitting Image: Myth, Memory and the Legacy of Vietnam is a 1998 book by Vietnam veteran and sociology professor Jerry Lembcke. The book is an analysis of the widely believed narrative that American soldiers were spat upon and insulted by anti-war protesters upon returning home from the Vietnam War. The book examines the origin of the earliest stories; the popularization of the "spat-upon image" through Hollywood films and other media, and the role of print news media in perpetuating the now iconic image through which the history of the war and anti-war movement has come to be represented.

Lembcke contrasts the absence of credible evidence of spitting by anti-war activists with the large body of evidence showing a mutually supportive, empathetic relationship between veterans and anti-war forces."

“So where do these stories come from?”

The reporter was asking about accounts that soldiers returning from Vietnam had been spat on by antiwar activists. I had told her the stories were not true. I told her that, on the contrary, opponents of the war had actually tried to recruit returning veterans. I told her about a 1971 Harris Poll survey that found that 99 percent of veterans said their reception from friends and family had been friendly, and 94 percent said their reception from age-group peers, the population most likely to have included the spitters, was friendly.

A follow-up poll, conducted in 1979 for the Veterans Administration (now the Department of Veterans Affairs), reported that former antiwar activists had warmer feelings toward Vietnam veterans than toward congressional leaders or even their erstwhile fellow travelers in the movement.