Friday's New Home Sales report added further evidence that the housing market is declining. Monthly New Home Sales showed the biggest decline in 9 years. The decline in New Home Sales was larger than the real estate mythologists predicted. The annualized New Home Sales rate declined 10.5% during the last month. (Technically, if 0 new homes had been sold during the last month, the annualized sales rate would have only declined 1/12th, or 8.3%. So some previously sold homes must have become "un-sold.") January's number was also revised downward. Had January's number not been revised, the decline would have been 12.5%. The annual New Home Sales rate has declined 21% since July. Median annual prices also declined to a -2.9% annualized rate of increase. Inventories increased from 5.3 months' worth to 6.3 months' in February.

Since October's peak in New Home Sales of 1.345 million/year, the rate has declined to 1.080 million/year. Unsold inventories of New Homes have risen 4 of the last 5 months, from 4.5 months worth in October to 6.3 months' worth in February. The unsold inventory of New Homes is the highest in 10 years according to Briefing.com Over the past year, there has been a 24% increase in new homes on the market, according to CNN Money.

The Existing Home Sales report from Thursday, March 23rd, was reported with unjustified opitimism. The seasonally adjusted sales rate actually declined from the previous year. February 2006's annualized rate was 6.190 million/year, marking a -0.3% change from February 2005's 6.930 million/year rate. Meanwhile, Existing home inventories INCREASED 5.2% over the last month, and increased 30.2% over the last year. Below are graphs from HoweStreet.com showing these changes. 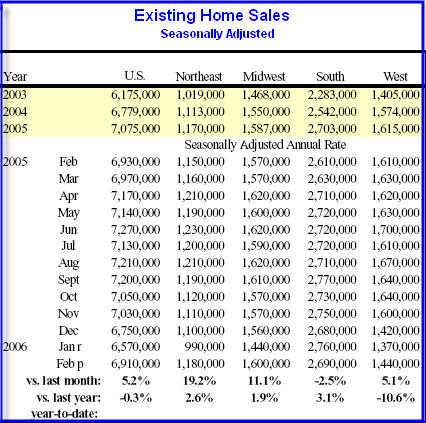 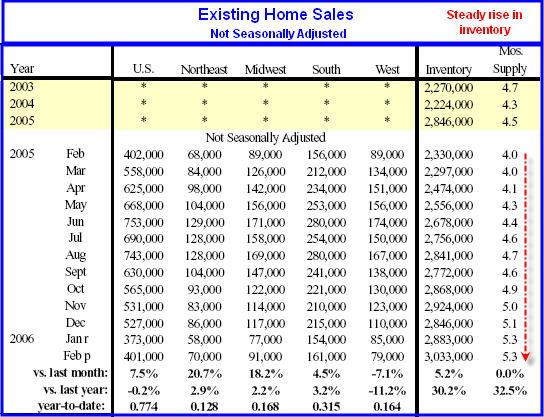 The Mortgage Bankers' Association purchase index also declined dramatically. The 4-week Purchase Index moving average has declined from 470 in October to 401.5 at present.

In summary, both New and Existing Home Sales are declining, with New Home Sales declining much more. Meanwhile, inventories are rising rapidly in both New and Existing Homes. The biggest inventory increases and sales declines are in bubble areas, especially California. Prices are actually declining in some areas, most notably Southern California. Housing Starts actually increased over the last month, which will increase inventories even further, and put further downward pressure on home prices.

The Housing Bubble is definitely deflating, and appears to be deflating even faster than many predicted.

There is already a thread topic on this subject.


The signs have been around for quite a while, and now it is finally happening. The bad news is that this is going to affect the economy negatively. The good news is that homes will become cheaper, as prices fall back in line with reality.