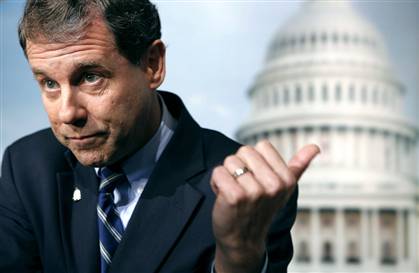 Aesop once wrote a story about a little shepherd brat who liked to play pranks on his neighbors. The boy (who must have been either supremely bored or extremely in need of some attention) would scream that a wolf was attacking his flock, then sit back and laugh at the gullible villagers who ran all the way up the hill from town to help him. He did this over and over again. There was never any wolf.

. . . Until one day there was. The boy screamed and screamed, but the people had been tricked one too many times. They ignored him. The wolf ate not only the sheep, but the little brat boy as well.

Today, wolves are out of style (well, maybe not), but Hitler is totally in. Senator Sherrod Brown (D) of Ohio "cried Hitler" by implicitly likening recent assaults on the collective bargaining rights of private union members in the midwest to the "H word's" policies toward trade unions in the 1930s.

Of course, he claimed soon afterwards that he didn't intend to imply that republicans = nazis and Walker = Hilter. After all, he only pointed out that going after unions was "the first thing [Hitler and friends] did" in a speech criticizing Republicans for going after unions soon after taking over states like Wisconsin. His real point was simply that "history teaches us that unions are a very positive force in society that create a middle class that protects our freedom." Apparently, this is taught by the fact that Hitler wanted them all dead, rather than by a list of things unions have done for the working class.

Of course, Brown is not the first to compare his opponents to Nazis. Glenn Beck was recently accused of having a "Hitler fetish" (mmm, yes please). Glenn Beck himself has been compared to Hitler, as well as Obama, Limbaugh, Rove, and anyone else you might name.

Nor is Brown even the first to do so regarding the current union drama. Last month Wisconsin Senator Lena Taylor (D) made similar, albiet more explicit, comparisons between Wisconsin Republicans and the German Nazi Party.

The one commonality between all these uses (besides, Hitler, of course . . .) is how absolutely and utterly ridiculous they all are. As Politifact pointed out last month, Hitler sent existing union leaders to concentration camps and prohibited workers from participating in any workers organization not created by himself. He did all this by proclamation, rather than by vote. Comparing Republicans to Nazis because of what they are doing in Wisconsin is not only illogical, it is dishonest and dishonorable.

Comparing your opponent to Hitler is simply a cheap shot. It is an argument that strikes people in their gut rather than in their head. If a politician really thinks his opponent's policies are bad - even bordering on immoral - he needs to articulate why in a reasonable manner, not fearmonger with outrageous comparisons that only serve to heighten divisive rhetoric and discourage compromise.

I understand that comparisons to Hitler are sometimes valid, and even important. Hopefully someone will warn us when the next real Hitler enters the scene. But until then, let's not cry wolf please. We have real serious problems to address. We don't need the distraction.
Click to expand...

I agree, Comparing anyone to Hitler is wrong (with a few exceptions). However, I believe it was a calculated move to get the issue in the national press. Any mention of “Hitler” – even 65 years after WWII ended is still a lightning rod. Indeed, it was a cheap shot – but cheap shots are sometimes very effective.
You must log in or register to reply here.
Share:
Facebook Twitter Reddit WhatsApp Share Link
Top Bottom