Chris Cuomo: 'The Media is Not Your Friend..& Those Women are Liars!'

CNN anchor Chris Cuomo has been caught on a secretly recorded conversation denying rumors of sexual misconduct during a conversation with President Trump’s former fixer Michael Cohen, according to reports.

In the recording, obtained by Fox News host Tucker Carlson, the two men are purportedly heard discussing how journalists have asked ABC — Cuomo’s former employer — if women have made allegations against him, according to the Washington Examiner.

In the recording, Cuomo is allegedly heard saying: “You know, I’m always careful when I talk to media. Do you know how many f— phone calls I’ve gotten from people at ABC who say that reporters are calling and lying about things they’ve heard about me, to try to get stories about me when I was at ABC?”
Cuomo continues: “Women who do work there saying, ‘Oh yeah, you know, some of these men,’ naming me with other guys, ‘you know, we bumped into each other once in the elevator, and he put his hand on my shoulder, and he made me really uncomfortable.’”

He adds: “I mean, what the f—! It’s a problem. And now … I’m careful with the media, always. I’ve always told you: The media is not your friend.” 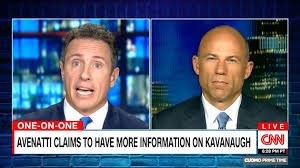