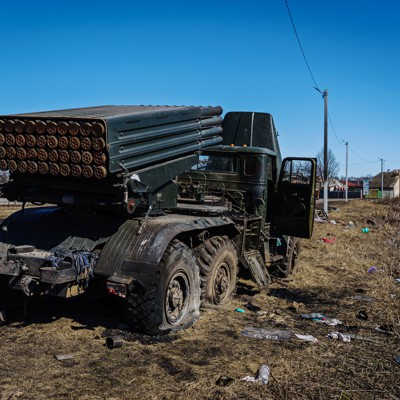 3.30.22
A group of Ukrainian hackers says it has found ways to disrupt Russian military units’ navigation and is working on ways to disrupt artillery fire as well. The nearly two dozen volunteers of the CyberPan Ukraine group work with the Ukrainian military and get funds from sources in Israel and the United States. In the weeks since Russia invaded Ukraine, one member said, the group has found ways to keep some field units from receiving signals from the GLONASS system, Russia’s version of the U.S. GPS satellite navigation constellation. Lost Russian forces are easier to find and target than ones that know where they are going. Currently, the group is looking for ways to disrupt artillery fire, at least from systems that employ precision guidance systems. The member said the group has identified several computer servers linked to Russian rockets. “We found many mistakes inside the system,” he said. Poor communications tech has hobbled the Russian war effort. Its Era secure cellphones aren’t working, in part because the invading forces destroyed many of the system’s cell towers, Bellingcat investigator Cristo Grovez said on March 7. This has forced many Russian units to use unencrypted phones, whose calls have been picked up by Ukrainian forces, foreign journalists, and others.

Russia does have better communication equipment, like software-defined radios such as the R-187P1 Azart and R-168-5UN-2. “The impression provided by the Russian Ministry of Defence (MoD) over the years has been that this equipment was widespread and that the majority of the Russian Armed Forces (RuAF) were operating digital radios and systems designed to facilitate planning and decision-making,” Sam Cranny-Evans and Thomas Withington wrote in a March 9 article for the Royal United Services Institute.” But that clearly isn’t the case, the authors note. Meanwhile, Russian state media have reported that the government is investigating corruption allegations against some Russian makers of communications equipment. The United States and other allies have been training and equipping Ukraine, which has had years to prepare for this invasion. “The Ukrainian military knows what technology the Russian military uses and this preparation gave them the opportunity to learn how to disrupt Russian comms.
Click to expand...