His strongman threats are scary. But don’t forget that he’s weak. 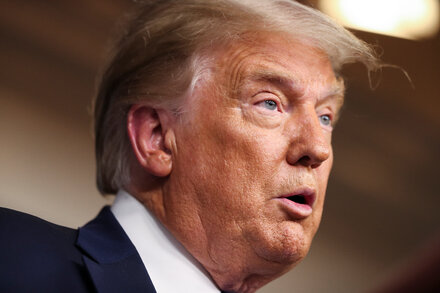 9/24/20
Living under a president who daily defiles his office and glories in transgressing the norms holding democracy together is numbing and enervating. It’s not emotionally or physiologically possible to maintain appropriate levels of shock and fury indefinitely; eventually exhaustion and cynical despair kick in. But every once in a while Donald Trump outpaces the baseline of corruption, disloyalty and sadism we’ve been forced to get used to. Outrage builds and the weary political world stirs. Sometimes even a few Republican officeholders feel the need to distance themselves from things the president says or does. Child separation caused this kind of clarifying horror. There was a moment of it when Trump tweeted that four congresswomen of color should go back to the “totally broken and crime-infested places from which they came.” And now, thanks to Trump’s latest attack on democracy, we’re seeing it again. At a Wednesday evening news conference, Trump was asked whether he would commit to a peaceful transfer of power after the November election. “We’re going to have to see what happens,” said the president. “Get rid of the ballots and you’ll have a very peaceful — there won’t be a transfer, frankly. There will be a continuation.”

His words — the demand to discard ballots, the dismissal of a possible transfer — were a naked declaration of autocratic intent. As terrifying as all this is, it’s important to remember that Trump and his campaign are trying to undermine the election because right now they appear to be losing it. The president is counting on his new Supreme Court nominee to save his presidency, and she may, if the vote count gets to the Supreme Court. Trump may be behaving like a strongman, but he is weaker than he’d like us all to believe. Autocrats who actually have the power to fix elections don’t announce their plans to do it; they just pretend to have gotten 99 percent of the vote. Trump would like to turn America into a dictatorship, but he hasn’t yet. For over four years he has waged a sort of psychological warfare on the populace, colonizing our consciousness so thoroughly that it can be hard to imagine him gone. “Remember the future.” There is a world after Trump. A plurality of Americans, if not an outright majority, want that world to start in January. And whatever he says, if enough of us stand up to him, it can.
Click to expand...

Trump has dominated the media and the background-noise for the past four years to such an extent that it is sometimes difficult to imagine an America without Don Cheeto screeching at us incessantly.

Trump as president is like having your finger stuck in an electrical socket 24/7. Exceedingly unpleasant.

But Trump is not a fabric of Americana. He is a wannabe autocrat without either substance or autocratic powers. The peaceful bliss of Joe Biden will be a much welcomed Nirvana.

The man is a moron. I personally look forward to the day when we have a President who isn't a trolling buffoon who says and does stupid things.

I don't agree with much of Biden's politics, but I will sleep better at night with him in the Oval Office.

He's probably right--we CAN'T get rid of him.

I am the pretty one.