Both acting DHS Secretary Chad Wolf and second in command Ken Cuccinelli were unlawfully appointed to their posts, watchdog says. 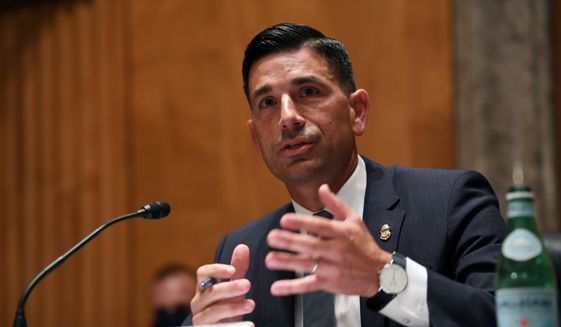 8/17/20
The two top officials at the Homeland Security Department are serving illegally, according to a legal decision by the Government Accountability Office. Both acting Secretary Chad Wolf and Senior Official Performing the Duties of Deputy Secretary Ken Cuccinelli are ineligible for their posts under the Federal Vacancies Reform Act and the Homeland Security Act, GAO said on Friday. The verdict was rooted in DHS circumventing the order of succession when Kirstjen Nielsen, the last Senate-confirmed DHS secretary, stepped down in April 2019. The department at the time flouted its requirement to place the director of the Cybersecurity and Infrastructure Security Agency as DHS' temporary head, instead tapping then-Customs and Border Protection Commissioner Kevin McAleenan. McAleenan’s subsequent appointments of Wolf and Cuccinelli were therefore invalid, GAO said, as he was not eligible to make them.

Wolf and Cuccinelli were named to their positions “by reference to an invalid order of succession,” GAO said. The auditors, who have authority to review the propriety of appointments under the Federal Vacancies Reform Act, did not rule on the fallout of their invalid service, instead deferring to the DHS inspector general for a decision on who should serve in the positions and “the question of the consequences of actions taken by these officials.” DHS did not respond immediately for comment. “GAO’s damning opinion paints a disturbing picture of the Trump administration playing fast and loose by bypassing the Senate confirmation process to install ideologues,” said House Homeland Security Committee Chairman Rep. Bennie Thompson, D-Miss., and House Oversight and Reform Committee Chairwoman Rep. Carolyn Maloney, D-N.Y., who requested GAO’s review. “In its haste to circumvent Congress’s constitutional role in confirming the government’s top officials to deliver on the president’s radical agenda, the administration violated the department’s order of succession, as required by law.” They called on Wolf to step down as acting secretary and return to his Senate-confirmed position of undersecretary for strategy, policy and plans, and for Cuccinellli to resign from federal government altogether.
Click to expand...

Upshot: Trumps handpicked DHS officials, who have had their DHS goon squads kidnapping citizens off the city streets in Portland, both hold their DHS positions illegally.