The State of Our Union

As the 43rd President of the United States addressed his fellow citizens in his fifth State of the Union, we are a torn country. A country of us and them, in which people often identify themselves by the color and mascot of the party they vote for; rather than acknowledging others as fellow Americans. Because of this we've lost our sense of national unity. What good is a union if we refuse to acknowledge one another's point-of-view, and work together to come to a compromise? James Madison, while trying to convince his fellow colonists to adopt the new Constitution, wrote,

"AMONG the numerous advantages promised by a well constructed Union, none deserves to be more accurately developed than its tendency to break and control the violence of faction."
-The Federalist, Number 10 1787


But, by continually setting aside the common good in exchange for the advancement of one faction over the other, we are neglecting the guiding principles of our nation's Constitution. A Patriot is not just a person that runs into battle to fight for their country; they are also those who have the strength to stand up, and question those who govern them in an effort to build a better nation. We must remember that the power of this government, which is by and for all its PEOPLE, is inherent within us; and every one of us is responsible to do our part to make it the best country it can be. Parities have fogged the vision of the American people for far too long and should no longer be an disruptive element in Government. So tonight as the President stands to address the most powerful nation in the history of the world, we must try put aside imaginary party lines in an effort to close the divide and reunite the nation. For as Abraham Lincoln once said, while addressing the Illinois State Congress on the issue of slavery, "A house divided against itself cannot stand." 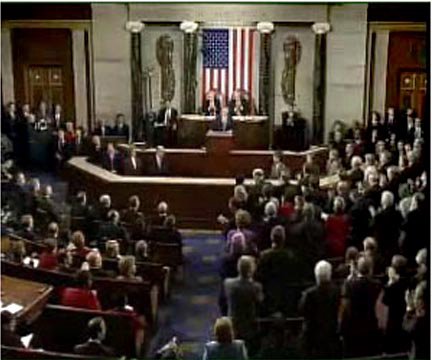