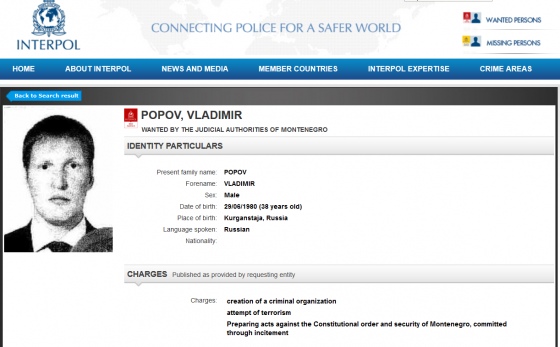 11/22/18
Two officers from Russia’s military intelligence (GRU) are sought, via Interpol, as suspected organizers of an unsuccessful 2016 coup in Montenegro, a small country on the Adriatic Sea in Southeastern Europe. The true identity of one officer is public, while the other officer is known only under his cover identity. Bellingcat has been able to unmask the real identity of the second suspect indicted by the Montenegro prosecutor, and to confirm that he is indeed a senior GRU officer. The name of the first Russian officer, Eduard Shishmakov, and his employment with GRU at the time of the events in Montenegro, was confirmed in a series of investigations by Bellingcat and its Russian investigative partner The Insider. The second person is only known to Montenegro prosecutors under his cover identity, Vladimir Popov. It is under this cover name that he is being sought by Interpol and by Montenegro’s partner law enforcement agencies in Europe. Bellingcat and the Insider have now succeeded in unmasking “Popov”’s actual identity, which is Vladimir Nikolaevich Moiseev. Moiseev, who is a lieutenant colonel or colonel with Russian military intelligence, was born on 29.06.1980, the same date as the fictional “Popov.”
Click to expand...

If you remember, the 2016 plot was designed as a last-ditch attempt by the Montenegrin pro-Russian opposition to prevent Montenegro′s accession to NATO, a move stridently opposed by Russia′s government that had issued direct threats to Montenegro concerning such an eventuality. The plot was actively supported on the ground by the Russian GRU. When it became clear the the coup attempt was foiled, the participants fled to Russia-friendly Serbia. The plot was planned by the Russian Institute for Strategic Studies (RISS), which is a part of the Presidential Administration of Russia. In 2017, the Montenegro Parliament voted 46-0 to join NATO.
You must log in or register to reply here.
Share:
Facebook Twitter Reddit WhatsApp Share Link
Top Bottom