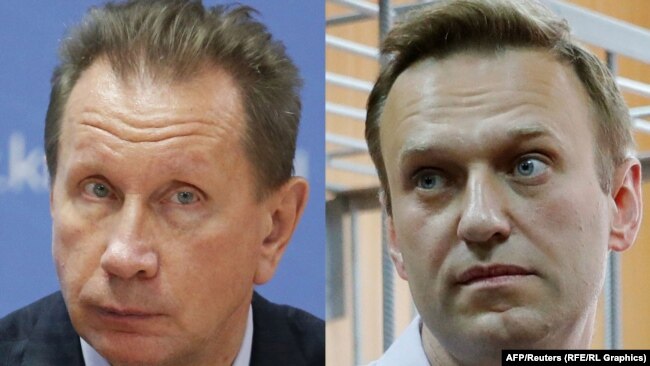 12/11/18
The head of Russia's National Guard, Viktor Zolotov, has filed a lawsuit against opposition politician and anticorruption activist Aleksei Navalny, demanding 1 million rubles ($15,000) in compensation for damaging his honor and dignity. Zolotov's lawyer, Shota Gorgadze, said on December 11 that his client wanted a court to rule that Navalny's allegations about Zolotov being corrupt are not true. If Zolotov wins the case, the money received in compensation will be given to an orphanage, according to Gorgadze. Navalny described the lawsuit against him as "very funny," citing Russian media reports that said the Federal Antimonopoly Service had received a request from the FSB security service to investigate possible violations in the National Guard's food purchasing program.

"Today, the head of the National Guard files suit against me. Why not against the FSB? Fine then, I'll say it all in court," Navalny also wrote. In August, Navalny issued a video showing images of luxurious properties that he claimed were bought by Zolotov and members of his family with "stolen money." Zolotov, a former steelworker and longtime security chief for President Vladimir Putin, released a video in September in which he appeared in full dress uniform and challenged Navalny to a duel in the fighting form of his choice, vowing to "make mincemeat" of his opponent. Navalny in October announced that he accepted Zolotov's challenge and proposed televised debates in a TV studio as his weapon of choice. However, Zolotov rejected Navalny's offer.
Click to expand...

I'm sure most of you remember the clown Zolotov, who challenged Navalny to a duel in September. Zolotov is a Putin boy, practicing martial arts with Putin and being appointed Putin's personal bodyguard. In 2016 Putin appointed Zolotov as the head of Russia's National Guard (Rosgvardia), a 350,000 riot squad organization that functions as Putin's personal army. And Navalny is probably right about the National Guard food purchasing program. Almost all Russian military food and food services are supplied by Concord Management, a parent firm owned by Yevgeny Prigozhin, a Putin crony who also owns the Russian troll factory in St. Petersburg.

Would Zolotov prevail in a libel suit? That isn't too difficult to figure out.....