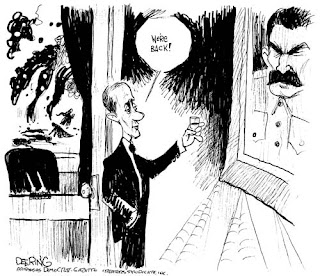 3.20.22
Russian President Vladimir Putin is becoming a "pariah," an outcast, before the world stage amid his ongoing invasion of Ukraine, foreign policy experts say. While experts believe it's too soon to determine whether Putin will be successful in his attempts to take control of Ukraine — acknowledging that there will likely be some form of a partial victory — it is clear that the Russian dictator has done irreversible damage to his own country with the invasion. "On the global scale, Russia will turn into a pariah. … It has already been on that path for several years and definitely the last year. Putin has been a pariah for even longer," former Defense Intelligence Agency specialist Rebekah Koffler, who was born in Russia, told Fox News Digital. "The deal with Putin is that he would rather be feared than [ignored] because fear, in Russian culture, means respect. He is quite used to the pariah status." While Koffler believes "a segment of the Russian population" is antiwar and sees what is happening in Ukraine, she noted that Russians have voted Putin into office four times.

"They don't think like Americans. They think like Russians. They have always wanted somebody who is as strong as Putin, bordering on being brutal, because that's what Russians believe is good for the country's security," Koffler explained, adding that "Russian propaganda" is very effective in swaying civilians. Conversely, Robert English, a professor of Central European Studies at the University of Southern California, believes Putin will face growing opposition at home. "I think Putin's future is grim. I think, at home, he will be under the constant threat of opposition — possibly of a coup, some kind of power grab — to remove him because even his closest allies are now seeing the problem," English said. "And if they gain less by staying loyal than they would if he's replaced, it's just a matter of how to do it." Even once Russia's war in Ukraine has concluded and Putin is no longer in power, the reputational damage of the invasion "will cripple Russia for a generation to come," according to English. As Western countries place heavy sanctions on Russia and Russian oligarchs, the country's civilian population will suffer worse economically over time. Putin, therefore, is his own greatest threat, according to English.
Click to expand...

A pariah nation with a pariah leader. Russia is the new North Korea.
B

If you watch the actual news, not fox, it's been obvious that is exactly what is happening. Even china seems like they don't want to help putin in his invasion of ukraine. It will all come to a head when the people of russia have suffered enough through the sanctions on them due to putin. This could be the worst mistake putin has ever made, it could be his downfall.
You must log in or register to reply here.
Share:
Facebook Twitter Reddit WhatsApp Share Link
Top Bottom