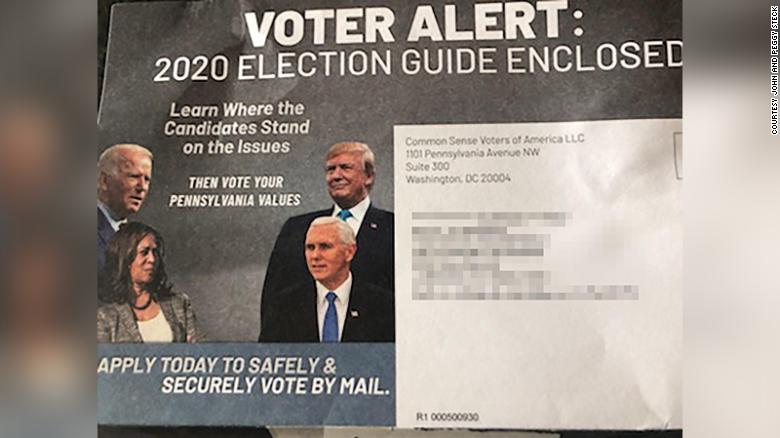 CNN)An Ohio-based political advocacy group that shares a Republican-allied law firm with Kanye West's political campaign is sending unsolicited mail-in ballot applications containing misinformation on Democratic candidates to voters in Pennsylvania and Minnesota -- both key battleground states for the 2020 election.
Common Sense Voters of America LLC, which was registered in June by the same law firm representing West in his suit to get on the Ohio ballot, sent mailers in August containing images of fake headlines about Democratic nominee Joe Biden.

While the mail-in ballot applications sent to voters appear to be legitimate, the mailers also include misinformation about Democratic candidates including Biden, his running mate California Sen. Kamala Harris and Minnesota Sen. Tina Smith, while positively portraying positions taken by President Donald Trump and Republicans.

Trump and his supporters have railed against mail-in voting, particularly of mass mail ballots that are sent unsolicited, and falsely claim that it is plagued by widespread fraud. In reality, there is no evidence that mail-in voting leads to fraud.
CNN obtained pictures of the mailers from registered voters in both Pennsylvania and Minnesota. The Philadelphia Inquirer first reported on the Pennsylvania mailers.

Bizarre that the same republicans that are screeching about 'voter fraud' would so blatantly and willingly participate in it. I will start the chanting in Michael Flynn style; 'lock them up! lock them up!'

Kanye West is a GOP tactic to siphon African-American votes away from Joe Biden.

It's a sophisticated form of voter suppression.

It's a sophisticated form of voter suppression.
Click to expand...