Economics Struggles to Cope With Reality

There are basically four different activities that all go by the name of macroeconomics. But they actually have relatively little to do with each other. Understanding the differences between them is helpful for understanding why debates about the business cycle tend to be so confused.

The first is what I call “coffee-house macro,” and it’s what you hear in a lot of casual discussions. It often revolves around the ideas of dead sages -- Friedrich Hayek, Hyman Minsky and John Maynard Keynes. It doesn’t involve formal models, but it does usually contain a hefty dose of political ideology.

The second is finance macro. This consists of private-sector economists and consultants who try to read the tea leaves on interest rates, unemployment, inflation and other indicators in order to predict the future of asset prices (usually bond prices). It mostly uses simple math, though advanced forecasting models are sometimes employed. It always includes a hefty dose of personal guesswork.

The third is academic macro. This traditionally involves professors making toy models of the economy -- since the early ’80s, these have almost exclusively been DSGE models (if you must ask, DSGE stands for dynamic stochastic general equilibrium). Though academics soberly insist that the models describe the deep structure of the economy, based on the behavior of individual consumers and businesses, most people outside the discipline who take one look at these models immediately think they’re kind of a joke. They contain so many unrealistic assumptions that they probably have little chance of capturing reality. Their forecasting performance is abysmal. Some of their core elements are clearly broken. Any rigorous statistical tests tend to reject these models instantly, because they always include a hefty dose of fantasy.

The fourth type I call Fed macro. The Federal Reserve uses an eclectic approach, involving both data and models. Sometimes the models are of the DSGE type, sometimes not. Fed macro involves taking data from many different sources, instead of the few familiar numbers like unemployment and inflation, and analyzing the information in a bunch of different ways. And it inevitably contains a hefty dose of judgment, because the Fed is responsible for making policy.

How can there be four very different activities that all go by the same name, and all claim to study and understand the same phenomena? My view is that academic macro has basically failed the other three.
Click to expand...

And my judgement - one I've had for a great long time - is that, stochastic models based upon past data, are very good at ... predicting the past.

The worst recession since the 1930s (aka the Great Recession) was so far off the radar-scopes that nobody-but-nobody saw it coming. Except a few sages that "worried" about the level of indebtedness.

And, for once, the Right is right to shout loudly that the US cannot continue indefinitely in its debt-spree: Federal Debt Held By the Public

All will be decided in November. If the Dunderhead gets elected, anything is possible. (Leave the country, watch the turmoil the Dunderheads bullheaded policies from afar.)

If Blondie gets elected, multiple avenues of formal change in economic policy open - but all roads lead to Rome. That is, she will be confronted with the proverbial challenge: Guns or Butter. Status Quo or Real-change.

Real-change requires attacking the Debt towards lowering it or at the very least maintaining it constant as a percentage of GDP. And the means to do so are the reformation of Upper-income Taxation (meaning ridding it of the ridiculous flat-rate tax at 30%*) and a hefty boost in Inheritance Tax. Both will do wonders towards repairing the damage done these past thirty years that Reckless Ronnie took a hatchet to upper-income rates that were once historically at 90%:

*And continuing the progressive taxation that actually exists in the lower income-quintiles, but stops dead above $68.7K per annum. See Total Effective Tax Rates: 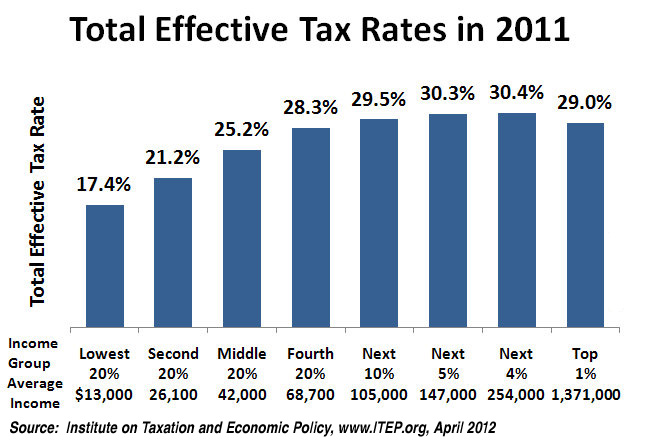 THE PAST REPEATS ITSELF

About upper-income flat-tax revision:
* At present, history has proven that the present circumstance benefits only a tiny, tiny percentage of all Americans (barely 11/12%) who own 88% of the Total National Wealth. The taxation is a money-pump from Net after-tax income into Wealth. (Bringing with it an impact upon our society and the "way we live" (especially those below the median wage line.)
* Were that progressive tax above a straight line (unbent) (in the infographic shown) the tax-rate would continue upwards to only 40%. The tax-rate would indeed be "progressive".
* But not nearly enough to dissuade the shenanigans on Wall Street and Main Street that prompt individuals to go full-bore on obtaining income by any and all means possible.
* Including those that brought about the Great Recession ...

As regards income, Speed Kills. Because once it become Wealth, it just sits in a corner earning interest. Rather than returning to the economic cycle as Consumption and thus sustaining jobs.

And who wants the Great Recession to happen again?

Because it will, just as the Great Recession was a repeat-performance of the Great Depression. Why?

Because in the interim between these economic cataclysms an entire nation forgets economic history - especially in America where history is 5 minutes ago and ancient history was yesterday.

Lafayette said:
repairing the damage done these past thirty years that Reckless Ronnie took a hatchet to upper-income rates that were once historically at 90%:

100% absurd of course. When you tax something you get less of it. When you tax our most productive people you get less of what they do,namely, make the economy grow and thus make a higher standard of living trickle down to everyone. Do you understand now?
You must log in or register to reply here.
Share:
Facebook Twitter Reddit WhatsApp Share Link
Top Bottom