THE RED PHEONIX HAS RISEN FROM ITS ASHES!


Ed Milliband wants to take Labour to the Left, siding with the trade unions after it was their vote which swung the balance in the leadership vote.

Higher tax, a watered-down pledge to halve Britain's deficit and a general refusal to condemn strikers are amongst the party's juicy new policies.

It looks as if the Socialist past of Labour shall again be its future. 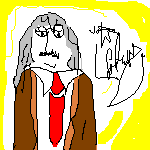 YES, isn't it absolutely lovely, you Public bigots! The Labour Party can now start winning again as it's back on the road to glory!

I've served New Labour faithfully through its years of success, being rabidly politically correct and without common sense and scruple in other ways too. I was a man of consistent principle, through thick and thin mate.

BUT WHEN NEW LABOUR STARTS TO FAIL, YOU'VE JUST GOT TO DUMP IT AND GO BACK TO THE SUCCESSFUL WAYS OF OLD LA... Well, alright, I know that failed as well. BUT YOU'VE GOT TO ROTATE YOUR POLITICAL CROPS HAVEN'T YOU?! Makes for the best in dogmatic fertility. Anyone can see that!

Look, when we get back to power as Old Labour, you're just going to have to put up with the fruits of a socialist government - such as wage claims, strikes, blackouts, hyper-inflation, loss of prestige in the international community, stifling of free enterprise, companies run from Whitehall, 96% rate of supertax, social division and class war. BUT THE POLITICS OF FAILURE WILL SUCCEED IN THE END, YOU JUST SEE IF THEY DON'T!


IT'S ME WHO'S GOING TO BLOODY SUFFER, YOU DISGUSTING PEOPLE! Dumping Labour, the party of the Persons', HOW DARE YOU! I've got to change, got to dump all my principles again. AND I'VE JUST SPENT THE LAST 12 YEARS LEARNING THE LAST LOT!

So how do we bridge the gap between Old and New Labour supporters, I get asked by my trusted acolytes? Well, my hyperactive and self-centred paranoid control freaks, I'll tell you!

WE HAVE TO FIND THE COMMON DENOMINATOR - COMMUNISM!

COMMUNISM is the common denominator because in both Old and New Labour we've enjoyed high stars of the party being Communists (or Communist sympathisers)!

It's just so simple!


Aaah, our consistency and equilibrium can now return as we build on this common ground again!


VOTE LABOUR! Whatever it is we'll stand for now in our heartfelt lifelong principles will DEFINITELY be fine and DEFINITELY be successful!

Labour Is More Popular Than The Tories For First Time Since 2007, According To A YouGov Poll | Politics | Sky News

On the eve of Ed Miliband's first conference speech as leader, YouGov puts the party on 40% with the Tories on 39% and the Lib Dems trailing on 12%.
Click to expand...

And what could have caused that? Stupidity on the part of a Public incapable of learning?

I don't think so. Even with a Labour-accelerated crashing of academic standards (with the fiddled exam rates claiming the total opposite), people aren't that dumb and lacking in common sense and joined-up thinking.


No, it's more likely a question of the 'heir to Blair' trying to out-Labour Labour, pushed harder by his politically-correct 'Liberal' sidekicks, that people are just balancing like-for-like and judging what they perceive - For them THE TORIES ARE WORSE!!

PLEASE ALLOW THEM TO INTRODUCE THEMSELVES, THEY'RE A LEFT OF WEALTH AND TASTE:

Clegg 'the Smeg' wants Britain to be bound BY LAW to dish away TEN BILLION POUNDS a year or more. And as Britain's old folk and homeless suffer or die, the idea of so much money going without qualifier to a selection of UN-backed despots and nuclear-powered politicians is just appalling.

And charity should just be a matter of conscience, not hogtied obligation.
Click to expand...

(That new record by the Smegg-Camerloon Alliance out on Blue Rinse Records.)
Last edited: Sep 29, 2010

LABOUR HAVE NO SHAME, even in defeat!

I wish I'd taken a snapshot of either the Express or Mail front pages. Under the headline LABOUR THAT LOST, a picture of David Milliband, head in hands, takes up the front page.

David Milliband's upset that he didn't make Labour leader. If only he was so upset for the country he helped ruin!