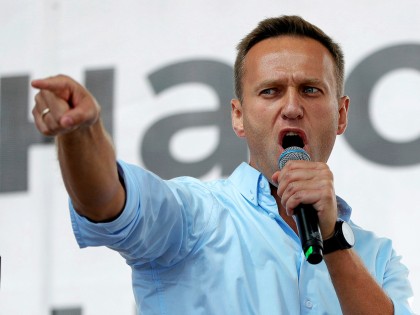 9/8/20
NOVOSIBIRSK, Russia -- Two attackers threw a glass jar with an unknown chemical liquid into an office housing the independent political coalition supported by opposition politician Aleksei Navalny's team in Russia's third-largest city, Novosibirsk. The jar broke and the room, filled with dozens of people on September 8, was quickly filled with a sharp, acidic smell. The room was cleared immediately, but two people felt sick and an ambulance was called, Yelena Noskovets, a member of Navalny's team in the city, told RFE/RL and Current Time. Noskovets added that the attack came as Navalny's group was giving a lecture to staff and volunteers on how to monitor regional elections scheduled for September 13. Police are investigating the attack. Navalny's associates have been on edge in recent weeks after the opposition figure fell sick during a trip to Siberia in late August. The plane he was travelling on was forced to make an emergency landing in the Siberian city of Omsk, where Navalny was rushed to hospital. He was later transferred to Berlin for treatment and on September 2, Germany said that toxicology tests provided "unequivocal evidence" that the gravely ill Kremlin-critic had been poisoned with a Novichok nerve agent.

On September 13, Russians will vote for governors of 20 regions and local lawmakers. Opposition parties in Novosibirsk have united into the Novosibirsk 2020 coalition to challenge the ruling United Russia party. Navalny's Smart Voting campaign has supported opposition and independent candidates across the country. Navalny's close associates, Lyubov Sobol and Leonid Volkov said to RFE/RL earlier in separate interviews that one of the most likely reasons for Navalny's poisoning was his Smart Voting initiative, which the Kremlin has started to consider as a serious political challenge.
Click to expand...

In the wake of the Navalny poisoning, this isn't a good [international] look for the Kremlin.