I have never been so disgusted with the IOC! Corrupt is a kind word. What happened to Womens Ice Skating was inexcusable and did irreparable harm to the sport.

This whole mess with Kamila Valieva is entirely the doing of the IOC. The moment she failed a drug test the IOC should have pulled her and looked at the rest of the ROC in the process.

The Russians have a long history with this nonsense.

At this point the IOC is too corrupt and too drunk on power to realize the consequence of what we saw over the past 48 hours.

Now this 15 year old girl is not entirely eyes wide shut skating for the Russians but at the same time that establishment ("entourage") showed their colors the moment the pressure got to her much too much. Harsh, demanding, cruel, are just a few things that could be said about the Russians and how they treat their own athletes.

She should not have been on that ice, and the IOC is responsible for letting it happen.

OrphanSlug said:
This whole mess with Kamila Valieva is entirely the doing of the IOC. The moment she failed a drug test the IOC should have pulled her and looked at the rest of the ROC in the process.
Click to expand...

A lot of adults have failed her.

A lot of adults have failed her.
Click to expand... 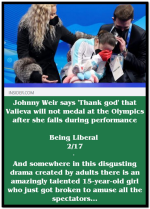 Ru$$ian Olympic Cheaters—Buck stops with Boris Badass who has 190,000 combat troops in offensive attack positions at this moment.

We respect their HWT we beat in the summer Olympics. That was done by current NCAA 285 champ Gable Steveson of Minnesota, to toot our horn. (Sorry for Jordan)

Girls wrestling has exploded over the last few years, and their Olympics were awesome. Your daughter can protect herself better in life also. Good kids.

This year's Olympics have been one big ass sham.

ROC is the sham Russian Olympic Committee.
Click to expand...

Well, I am not going to take up for the IOC in this matter but let me show you a chart: 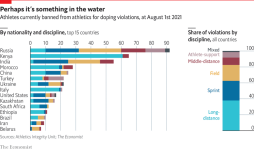 Where is the cut-off when applied to banning countries? Russia has the most banned athletes (this is only a Track and Field breakdown apparently) but we're up near 20 ourselves. Jamaica conducted only one test before sending their delegation to London in 2012.

This isn't to say that you should just allow anyone to compete but I don't think we can ban a nation outright because of some bad actors.

But about the IOC...

What the problem is, in my view, is that the IOC essentially outsources their responsibilities to the international federations (35 of them) that oversee (or is it overlook???) the sports and the individual nations become virtual "black boxes" when it comes to self policing. Very famously, the US left sprinter and straight up freak Sha'Carri Richardson off of the 2020 US Olympic Team because she had marijuana in her system. The decision to leave her off the team was done by the US Track and Field Association--not the USOC (who likely would have rejected her anyway). She took responsibility for her actions and the result was a "clean" event. When nations do not act in good faith and athletes do not take responsibility, you have what transpired on the figure skating ice in Beijing this week with collateral damage to the Games at large. Not to mention a 15 year old phenom who may not ever recover emotionally. Sidebar::: how do you counsel someone who goes through something like this at that age?

In short, what Russia did was this as I understand it: The Russian Doping Agency conducted a drug test on 12/25/21. Vileava flunked the drug test on her "A" sample. When this happens, the proper protocol is to test the "B" sample immediately. The "B" test was never done. So it was termed as "inconclusive" which allowed her to go to Beijing. Once the competition began, the IOC demanded the results and then we have the "discovery" of the flunked test. The suspension was imposed. Then the court of arbitration overturned it.

Again, the IOC is outsourcing it's decision to the Court in this case.... For those interested...here is the flow chart from 2016... not especially hopeful in terms of who is over what; and this is before you even get to the individual nations' Olympic committees and their layers and layers of bureaucracy (the USOC has like 46 federations that answer to it--US Track and Field, US Basketball, US Weightlifting etc...). 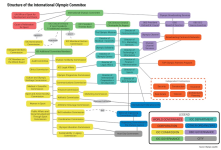 I would speculate as to why the IOC is set up this way to where it reaps the rewards for the games but avoids any responsibility...but that speculation isn't necessary. It's money. Pure and simple. Having Russia compete in the Olympics means that millions and millions of Russian eyes are watching the TV and Internet screens and paying the broadcaster who bid on the rights to show the competitions. If Ivory Coast had this doping problem....the IOC would have no problem banning them from ever saying the world "Olympics" much less sending a delegation.

Its exactly like the NCAA in my view without the "bad cop" of public humiliation keeping bad actors in line, somewhat. The NCAA needs Alabama, Notre Dame, USC and Penn State more than they need the NCAA. In some ways, the Olympics is in the same boat with the individual countries. If the US were so inclined, they could act just as bad as the Russians.... NBC has paid $7.7 Billion through 2032. If the US were to be banned, that money would evaporate quickly thereafter. And that doesn't include the money spent to get the games in LA, Paris, etc...

One does have to wonder where the $7.7 Billion plus goes....

ROC is the sham Russian Olympic Committee.
Click to expand...

The Russian government is being punished for decades of covert state doping campaigns covered up by the Russian anti-doping agencies. Except there are many Russian athletes which compete so often outside of Russia that they can be designated as safe. As safe when it comes to doping use. It would be terribly cruel to ban all those non-doped Russian athletes be the victim of a government that promotes and covers up cheating.
You must log in or register to reply here.
Share:
Facebook Twitter Reddit WhatsApp Share Link
Top Bottom