The poll was conducted about two weeks ago, March 30–31, among 824 likely Republican primary voters and found Kemp receiving 49 percent support compared to Perdue’s 33 percent support, while 12 percent of respondents said they were undecided.

Kandiss Taylor, who is running to the right of both candidates, received five percent support, and another Republican candidate, Catherine Davis, received one percent.

The poll’s findings are significant in that Kemp could potentially avoid a runoff election, which would occur if a candidate does not attain 50 percent of the vote in the primary.

Another recent poll, taken by Emerson College Polling and the Hill, had found Kemp farther away from the 50 percent mark and in a more vulnerable position in the event of a runoff. That poll found that if Kemp and Perdue faced off in a runoff, Kemp led Perdue by a slim margin of five points.

The Cygnal poll painted a more optimistic picture for Kemp, showing that in the case of a runoff between Kemp and Perdue, the governor led by 15 points.

The memo warned, “A costly runoff would be devastating for the Republican Party ahead of what will surely be a bruising general election versus Stacey Abrams.” Abrams, who narrowly lost to Kemp in the 2018 gubernatorial race, is the uncontested Democrat candidate the winner of the Republican primary will face in the general election.

Perdue launched his campaign against Kemp in December and was quickly endorsed by former President Donald Trump, who has weighed in heavily on Georgia’s primary races with the ultimate mission of unseating Kemp, whom Trump has targeted over Georgia’s 2020 election process. 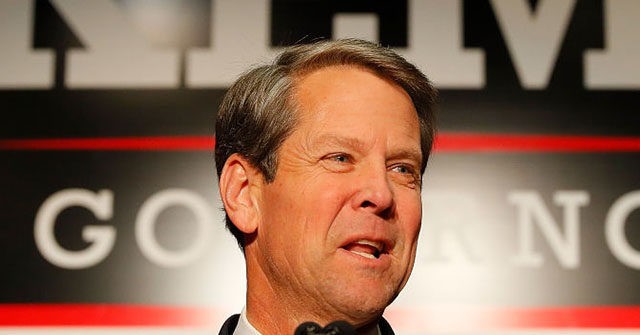 Gov. Brian Kemp has a 16-point lead over former Sen. David Perdue in Georgia's Republican gubernatorial primary, according to a polling memo.

What a rebuke of Trump by Georgia Republicans.

The poll is good news for anti-Trump Republicans.

But not for Democrats:

The general election poll found Kemp ahead of Abrams by six points, 50 percent to 44 percent, and Perdue trailing Abrams by one point, 47 percent to 48 percent.

That poll also asked respondents about priority issues and revealed “combatting inflation and lowering gas prices” was the number one issue, receiving 23 percent. Other top issues were “growing the economy and bringing more jobs to Georgia” at 22 percent, “making healthcare more affordable” at 17 percent, “improving education” at 11 percent, and “stopping illegal immigration” at eight percent.

The primary takes place on May 24, and early voting begins in less than a month, on May 2.
Click to expand...

The other pollsters show something similar.

In November, it will be a GOP wave and if she didn't win then... she won't win now.

The other pollsters show something similar.

In November, it will be a GOP wave and if she didn't win then... she won't win now.
Click to expand...

I agree. The sentiment here in GA is that Perdue doesn't stand a chance. If things continue down the path they are on, Abrams likely won't either.

Well, the upside is another er Trumper bites the dust. If it can't de a Dem second best is a candidate Trump did not endorse. His losing his strangle on the GOP is so important.
You must log in or register to reply here.
Share:
Facebook Twitter Reddit WhatsApp Share Link
Top Bottom