From the Economist - Briefing, Globalization and politics

Here. (If a subscriber)

... the success of drawbridge-up parties in so many countries is driven by several underlying forces. The two main ones are economic dislocation and demographic change.

Economics first. Some 65-70% of households in rich countries saw their real incomes from wages and capital decline or stagnate between 2005 and 2014, compared with less than 2% in 1993-2005, says the McKinsey Global Institute, a think-tank. If the effects of lower taxes and government transfers are included, the picture is less grim: only 20-25% of households saw their disposable income fall or stay flat. In America nearly all households saw their disposable income rise, even if their headline wages stagnated. Such figures also fail to take full account of improvements in technology that make life easier and more entertaining.
Nonetheless, it is clear that many mid- and less-skilled workers in rich countries feel hard-pressed. Among voters who backed Brexit, the share who think life is worse now than 30 years ago was 16 percentage points greater that the share who think it is better; "Remainers" disagreed by a margin of 46 points. A whopping 69% of Americans think their country is on the wrong track, according to RealClearPolitics; only 23% think it is on the right one.

Many blame globalisation for their economic plight. Some are right. Although trade has made most countries and people better off, its rewards have been unevenly spread. For many blue-collar workers in rich countries, the benefits of cheaper, better goods have been outweighed by job losses in uncompetitive industries. For some formerly thriving industrial towns, the impact has been devastating (see page article).


Economic insecurity makes other fears loom larger. Where good jobs are plentiful, few people blame immigrants or trade for their absence. Hence the divide between college-educated folk, who feel confident about their ability to cope with change, and the less-schooled, who do not. 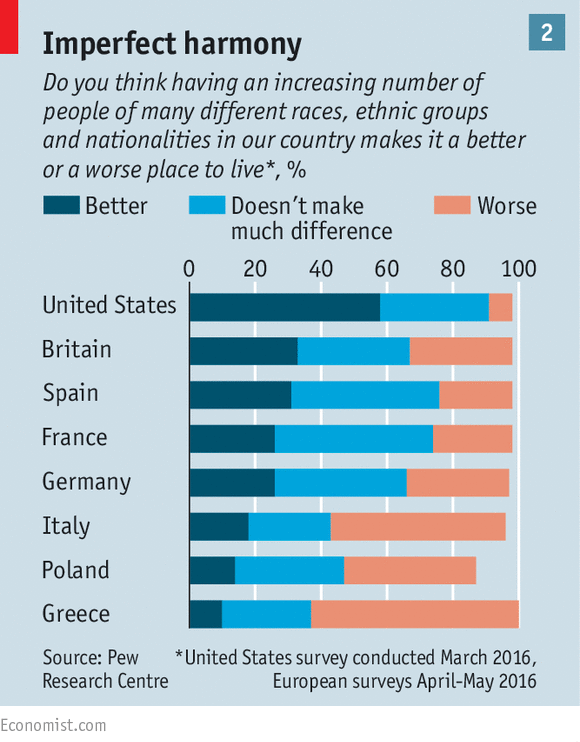 It is clear from the above info-graphic that Americans tend more to believe in ethnic diversity than the opposite. That same sentiment is less felt elsewhere, principally in Europe. One might ask the question "Why?"

Europe has had significant amounts of immigration by all factions (religious or language), but has not been able to assimilate them as well as the US.

Being the product of one such family, I can remember no reluctance of the part of my family to be "fully American", whilst celebrating some uniqueness that had come along from the "old country". Nobody bothered us, and tolerance was high because so many ethnicities were doing it.

But, the same social phenomenon, though happening at the everyday street level, was not inserting itself so democratically in European customs, that have remained uniquely nationalistic. Meaning what?

Quite possibly, that the unification of Europe into One Country stops at the border - people being very concerned to maintain the National Identity in preference to any imported sub-set. Which is tolerated, but often challenged/questioned in tough circumstances.

As occur now in Europe - and just might have an impact upon the upcoming election in November?

while britains economy has grown they haven't shared the gains of this growth with the average citizen, so on paper britain is doing great, but the average british person especially those from small manufacturing centers in the middle of the country, haven't felt that growth, immigrants are being scapegoated sure, by the press and politicians but they really have little effect on the economy as a whole. I wouldn't take that chart too seriously either.
Last edited: Jul 31, 2016
You must log in or register to reply here.
Share:
Facebook Twitter Reddit WhatsApp Share Link
Top Bottom