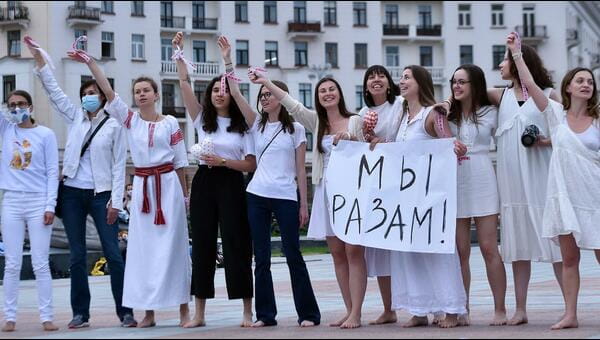 9/2/20
MINSK -- Throngs of women peacefully protested in central Minsk late on September 1 after earlier in the day security forces detained dozens of university students rallying in response to a call from Belarus’s opposition for a nationwide strike to coincide with the first day of the school year. Several hundred women gathered near Independence Avenue in the capital, some singing and dancing as police looked on without intervening. Women have taken a leading role in more than three weeks of protests against President Alyaksandr Lukashenka’s rule, often forming lines to shield men from arrest. Earlier in the day, columns of students carrying banned red-and-white flags representing the opposition gathered in front of universities and flocked into the center of Minsk. "September 1 is a day of knowledge. Knowledge of the meaning of Belarusian solidarity. Join this one-day strike, support the workers and show the government who is the real source of power," opposition leader Svyatlana Tsikhanouskaya’s team said in a statement. At least 55 people were detained as riot police dispersed protesters at several locations, according to the Vyasna human rights group. Video posted on social media showed police dressed in black charging into a line of students and forcefully dragging them away. The Belarusian Journalists Association said eight journalists covering the protests were detained for attending unauthorized protests.

Much of Europe, as well as the United States and other countries, have rejected the election results and criticized Lukashenka's crackdown on protesters and opposition members both before and after the vote. In a statement on September 1, UN human rights experts said they had received reports of 450 documented cases of torture and ill-treatment of people held in custody since the election. “Any violation of the non-derogable prohibition of torture and ill-treatment must be prosecuted and punished," they said. The experts also said that most people reported missing have been accounted for, but the whereabouts and the health situation of at least six individuals are said to be unknown to their relatives. Lithuanian President Gitanas Nauseda on September 1 called on the UN Human Rights Council to immediately convene to discuss the situation in Belarus. Separately, Lithuania along with Latvia and Estonia announced on August 31 that they had slapped travel sanctions on several top Belarusian officials, including Lukashenka. The European Union has agreed to impose sanctions on up to 20 senior Belarusian officials suspected of involvement in election fraud and the brutal crackdown on protesters.
Click to expand...

The OMAN riot police are hesitant to use force against the female protesters. They know that there is a good possibility that perhaps their wife, mother, grandmother, sister, or other female relatives may be in the crowds.

Women have fueled the larger portion of the Belarus election and subsequent protests against the fraudulent Lukashenka government.