What is the Syrian Electronic Army?

The Syrian Electronic Army, a group of pro-Syrian regime hackers that has aggressively targeted major news organizations and activists, has claimed credit for a 20-hour-long outage of the New York Times website.

Several Twitter users posted screenshots of a "Hacked by SEA" message they said they received when they went to the New York Times homepage Tuesday. 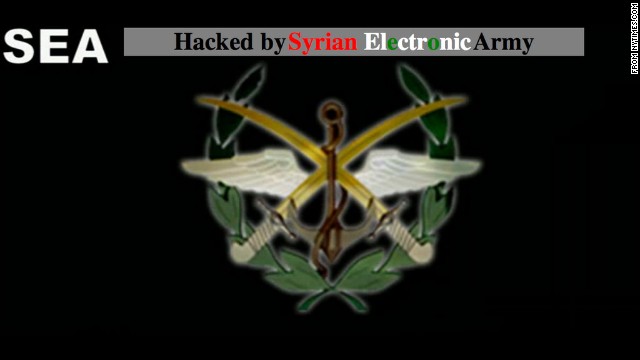 It's not the first such action by the group; in recent months, it claims to have hacked major UK and U.S. news organizations, as well as Columbia University and rights group Human Rights Watch. CNN.com has been the target of similar attacks.

After the latest apparent hack, fresh questions are being asked about what the Syrian Electronic Army is, where it's from and how it operates.

In its own words, on that website, the Syrian Electronic Army says, "We are a group of enthusiastic Syrian youths who could not stay passive towards the massive distortion of facts about the recent uprising in Syria."

In recent weeks, some anti-Assad groups have emerged, one calling itself the al-Nusra Electronic Army, in a reference to one of the key rebel groups involved in the fight against al-Assad's forces. A sectarian divide has also emerged, with some Shiite groups defacing Sunni groups' websites and vice versa, Noman said.....snip~

What is the Syrian Electronic Army? - CNN.com

These are the guys that were responsible for saying the White House was attacked an Obama was injured. Also the piece states Assad knew of them back before he was President. Do you think these Hackers can cause our ships any problems? Any of Missiles? What about communications?

Also I would note the Cyber war now taking place between the Sunni and the Shia.

Location
On a Gravy Train with Biscuit Wheels

Mornin' ILOR :2wave: Lets hope they can't do anything with ships and or other tech.

It would Appear the Syrian Electronic Army has Struck Again.....This time they hit my cuzins. The US Marines

.....recruiting Website. :shock: Seems these guys are a bit above the Average Hacker. They even put pics of US Marines holding up signs saying they didn't join to fight with AQ.


U.S. officials confirmed a cyber attack by the Syrian Electronic Army on the Marine Corps recruiting website late Monday in which the pro-Assad collective replaced the normal page with one calling on U.S. servicemen to refuse orders to fight in Syria should they be called.

The confirmation, which came in a confidential bulletin sent to U.S. officials across the country obtained by ABC News, said that the website defacement included pictures of people wearing U.S. military uniforms holding signs in front of their faces with short declarations like "I didn't join the Marine Corps to Fight for al Qaeda in a Syrian civil war."

"Obama is a traitor who wants to put your lives in danger to rescue al Qaeda insurgents," a message from the SEA on the site said, calling the Marines their "brothers."

The Marines Corps recruiting website appears to be functioning normally as of this report, but can now be counted among the SEA's high-profile victims of cyber vandalism. Previously, the group took responsibility for disrupting service for The New York Times website, The Washington Post website, as well as taking over the Twitter accounts of The Associated Press and the satirical news website The Onion, among many others.....snip~

Well we know that western press is portraying the Syrian government as the aggressors, attacking the civilian population and destroying the country. Yet here we have Syrian youth wishing to set the record straight!!

Montecresto said:
Well we know that western press is portraying the Syrian government as the aggressors, attacking the civilian population and destroying the country. Yet here we have Syrian youth wishing to set the record straight!!
Click to expand...

Yeah, and now threatening to strike us anywhere and everywhere. Saying they can be destructive. That so far they have not as they just wanted the truth out. But their leader said if we strike Syria. They will come after us.

A computer user claiming to be a leading member of the Syrian Electronic Army, a pro-Assad hacking collective, said late Wednesday that his group "may" retaliate against a U.S. military strike with their own cyber assaults targeting the U.S. economy.

"When we hacked media we do not destroy the site but only publish on it if possible, or publish an article [that] contains the truth of what is happening in Syria," the alleged member, who goes by SEA The Shadow online, told ABC News in an email exchange late Wednesday. "So if the USA launch attack on Syria we may use methods of causing harm, both for the U.S. economy or other."

All American sites will be our targets and we may be more destructive," the hacker said.....snip~

Well I mean, who wouldn't defend themselves from attack?

Montecresto said:
Well I mean, who wouldn't defend themselves from attack?
Click to expand...

Well, that's not to smart going after the US Marines Websites. They'll only get my cuzins angry with them. Just sayin!

Location
Where they have FOX on in bars and restaurants

I really hope Obama is putting some focus on the cyber threat instead of wasting all his time on AGW, I think this is a very dangerous and growing threat.

sawyerloggingon said:
I really hope Obama is putting some focus on the cyber threat instead of wasting all his time on AGW, I think this is a very dangerous and growing threat.
Click to expand...

Heya SL. :2wave: I am Surprised.....All the Devil Dogs haven't been sounding off myself.

"Say What".....You Jar Heads aint got nuthin to sound off on. Well that's a first on me with peeps messing with you Devil Dogs.


The intelligence community is warning of reprisal attacks if the U.S. strikes Syria. The threat includes cyber attacks against American companies and government targets. CBS News senior correspondent John Miller, a former assistant director of the FBI, discusses what the intelligence community is warning American companies and the government about retaliatory strikes.....snip~