'Violence For the Sake Of Violence': Minsk IT Worker Recounts 'Torture' In Belarusian Jail

'Violence For the Sake Of Violence': Minsk IT Worker Recounts 'Torture' In Belarusian Jail 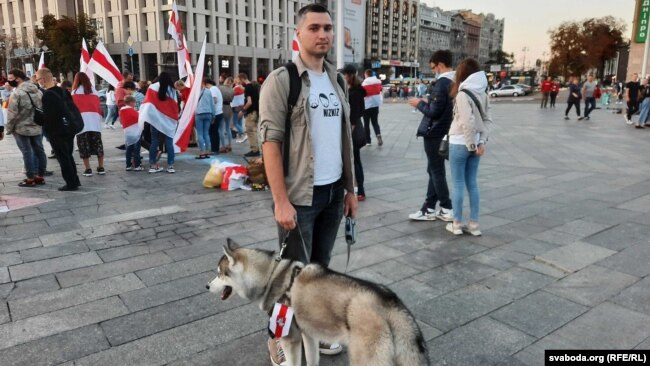 9/23/20
With his dog and cat by his side, Maksim Karaleuski stood in the square, the red-and-white flag of the first independent Belarusian republic draped over his shoulders, joining calls for Alyaksandr Lukashenka to step down. Authorities have brutally suppressed many of the demonstrations in Minsk and elsewhere, detaining thousands and beating hundreds -- including Karaleuski, who was arrested as he bicycled home late on August 11, long after protests that day had ended. But this time, Karaleuski did not fear arrest: He was in Kyiv, not Minsk, demonstrating alongside fellow Belarusians in Ukraine and other supporters of the protests against Lukashenka and his government. Karaleuski arrived in the Ukrainian capital earlier this month after a horrific night in Minsk's notorious Akrestsina jail -- where "lawlessness and torture" reigned, he said. "At the beginning of the night, they ordered us on our knees, and then put us in a different cell -- there were 127 people in there," he told RFE/RL's Belarus Service. "We didn't get any water, no food, it was very cold, but no one cared. We faced constant abuse. If you moved or asked for something, you could get slugged. If you asked for a lawyer, a fair trial, or disputed the police report, they could brutally beat you."

Karaleuski said he suffered beatings all over his body, his testimony echoing much of what others held there say they endured. "I had bruises all over, on my back, legs, thighs, and face. When they detained me, they shaved a cross on the back of my head. I didn't know why or understand the reason because I have short hair. It was violence for the sake of violence," he explained. "They cut up my shorts and ordered me to unlock my phone. But they ended up doing it themselves, with my finger, because my phone has a fingerprint ID sensor." Karaleuski was relatively fortunate: He was freed the next day, on August 12, along with some others. Shortly after that, Karaleuski, an orphan whose only relative in Minsk is his grandmother, decided it was time to take his pets and leave Belarus as the authorities began rounding up opposition leaders or forcing them to flee the country -- including presidential candidate Svyatlana Tsikhanouskaya, now in Lithuania, who claims she was the real winner of the election. "When there was news that the Ukrainian government would facilitate the resettlement of Belarusians -- it was on September 3 -- I decided to move. I had an invitation to work, but at the border I wasn't asked about it. I only showed my passport and COVID-19 insurance. They did not ask for anything else," Karaleuski said. "It was good timing, because afterward I heard that at the border they began to ask for certain documents. But I was lucky."
Click to expand...