Kind of a sad story to me, in a way... She gave me rides all over the world and not once failed in her duty -

The 52 year old Iron Horse started out life as a nondescript C-130E, spending much of the 60s and early 70s hauling material and personnel around the Vietnam Theater of operations. It rambled on as a standard line C-130E for decades, spending many thousands of hours doing what C-130s do, which is just about everything having to do with logistics and wings. 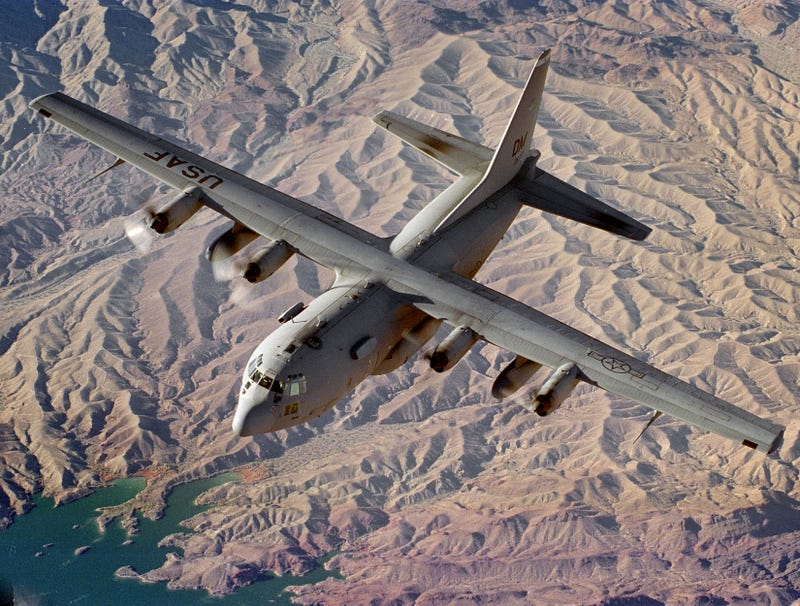 Iron Horse has been flying low-level blacked out aerial refueling missions, delivering PJs to their drop zones at all different altitudes, performing search and rescue missions and a whole slew of other cool crap for over ten years, flying with the 71st Rescue Squadron, based out of Moody AFB. Now, with some 27,533 hours on her 52 year old airframe, and with the much more capable and modern HC-130J Combat King II joining the fleet, Iron Horse has taken her last ride. Her final destination, like almost every other DoD bird that is no longer wanted or afforded, is her old home at Davis Monthan AFB, only this time she will sit in the 'back lot' instead of on the flightline.

Hercs are awesome planes. They are still Making them 60 years later.
That says something about how right the original design was.

Getting a lot of bang for the buck out of that particular aircraft with its service life. Sitting on cargo netting, with it being either miserably hot or ice cold (usually within the same flight) and feeling every rattle in the frame made for some fun times. Of course as a Marine, you can sleep anywhere so I got some naps in too on those things.

Land by the Gulf Stream

We, Canada had one in service, the engines just kept on working well past expectations, no overhaul, tecks did their stuff time and again, nothing wrong, no need for overhaul, those engines IIRC set a record for that type and time. Just kept at it. Lockheed offered big money for those engines.

Beaudreaux said:
Kind of a sad story to me, in a way... She gave me rides all over the world and not once failed in her duty -
Click to expand...

The c-130 in general is an awesome plane, though from my experience you have to run ahead of all other soldiers to sit in the front, ahead of the turbo props, since behind them you got the full effect of the noise. Also last time I flew in one, they told us if you need to piss there is a small opening in the back of the plane, if you need a bowel movement don't, and if you were a woman you were sol. Basically it was an older model with a pipe for it's bathroom.


Likely it is not even newer models coming into play that sent it to the boneyard, as america likes to refurbish as sell obsolete military equipment to ally countries or repurpose them for civilian use. It is likely that after that long in service, it is getting unserviceable, and with everything down to the frame eventually needing replacing, a newer plane would be cheaper than rebuilding something with that many flight hours to meet specs.
You must log in or register to reply here.
Share:
Facebook Twitter Reddit WhatsApp Share Link
Top Bottom