US to close its airspace to Russian operators

US to close its airspace to Russian operators

3.1.22
The U.S. is closing its airspace to Russian operators, following suit after a slew of allies did the same in the past three days. Russia is expected to respond in kind, banning U.S. operators from its massive airspace, just as it has done for the more than 35 countries, including the entire European Union and Canada, that have already banned Russian operators. No U.S. passenger airline currently flies to Russia, but the closure of Russian airspace will affect flights that have historically flown over the nation on routes between Asia and North America. Already, United Airlines announced earlier Tuesday that it would end its use of Russian airspace, becoming the last U.S. passenger carrier to end its Russian overflights. United is suspending two routes to India as a result of this action. “This won’t affect much beyond cargo flights by Russian carriers, but a (likely) reciprocal ban will affect about 300 flights per month (nearly all cargo) and most of those can take a slightly longer routing to avoid eastern Russian airspace,” tweeted Ian Petchenik, a spokesman for popular flight-tracking site Flightradar24.com.
Click to expand...

Done and done. UPS and DHL will have to suck it up and make fuel adjustments.

I read, therefore I am.

Rogue Valley said:
US to close its airspace to Russian operators
Click to expand...

I was glad to hear that this was being done, but realized today that closing US airspace to Russian operators wouldn't close it to other airlines flying passengers to and from Russia.
Last edited: Mar 2, 2022

NewfieMom said:
I was glad to hear that this was being done, but realized today that closing US airspace to Russian operators wouldn't close it to other airlines flying passengers to and from Russia.
Click to expand...

Very few international airlines are now flying to/from Russia. These companies don't want to get included in Western sanctions which can bankrupt a company.

Russian airliners are banned from the airspace of the EU and every G7 country.

I read, therefore I am.

Russian airliners are banned from the airspace of the EU and every G7 country.
Click to expand...

It's not enough. (In my opinion.) I do not blame the Russian people, but I feel they should not be allowed to fly to the US if they use the airplanes of any countries who do not oppose this invasion. I feel that no airlplanes from any country should be allowed to take off from or land in the United States if they have traveled to Russia. 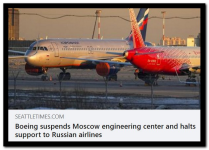