Ukraine to mark 30 years since Chernobyl shook the world

Ukraine to mark 30 years since Chernobyl shook the world 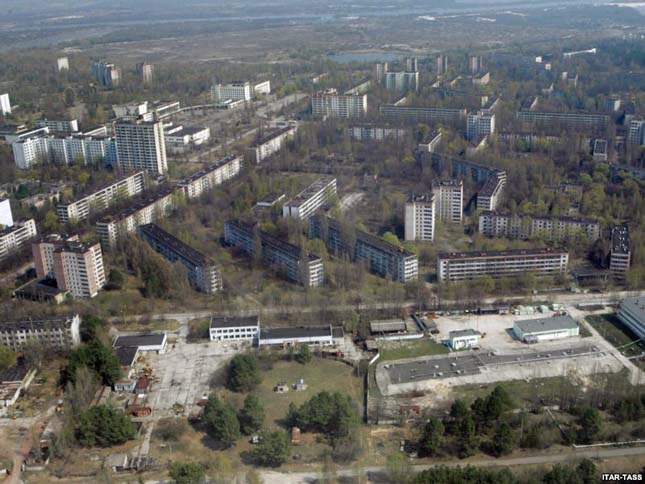 Chernobyl workers and their families once lived here in the nearby city of Pripyat. The day after the reactor explosion, Soviet authorities
ordered all Pripyat residents to stop whatever they were doing and board evacuation buses. No one has lived in this ghost city for 30 years.

Ukraine is preparing to mark 30 years since the Chernobyl disaster, the world's worst nuclear accident whose death toll remains a mystery and which continues to jeopardize the local population's health. More than 200 tonnes of uranium remain inside the reactor that exploded three decades ago at the Chernobyl nuclear power plant, raising fears there could be more radioactive leaks if the ageing concrete structure covering the stricken reactor collapses.

At 1:23 am on April 26, 1986, reactor number four of the Chernobyl nuclear power plant, located about 100 kilometers (60 miles) north of Kiev, exploded during a safety test. For 10 terrifying days, the nuclear fuel kept burning, spewing clouds of poisonous radiation that contaminated up to three-quarters of Europe, with Ukraine and neighboring Belarus and Russia hit especially hard.

As the horror unfolded, the Soviet authorities said nothing publicly, in keeping with a tradition of preventing people from learning of tragedies that could tarnish the image of the Cold War-era superpower. They evacuated the 48,000 inhabitants of the town of Pripyat, located just three kilometers from the plant, only the following afternoon.
Click to expand...

The Chernobyl reactor complex is situated relatively close to the Pripyat river which in this area is the natural border between Ukraine and Belarus. Due to the wind direction 26 April 1986, Ukraine was spared the worst. 70% of the cloud of radioactive debris from the destroyed Reactor #4 traveled northward over Belarus. It is unknown precisely how many lives have been lost due to the disaster. A circular 20 mile Exclusion Zone is in place all around the Chernobyl nuclear complex. This area won't be fit for human habitation for at least 10,000 years.

Five well-known tour agencies in Kyiv offer a daylong tour of Chernobyl. But about ten years ago I contracted with a young resident (Svitlana) of Slavutich as a Chernobyl guide. Slavutich is a city that was built expressly for the evacuated residents of Pripyat. The deserted city of Pripyat is now overgrown with trees and plants. It is a very strange place to visit. People's lives are in a stasis here, exactly as they were 30 years ago when the people were ordered to leave. Meals are on dinner tables and school books are on classroom desks. I would estimate I approached the reactor site within 800 yards. My dosimeter, calibrated for µSv/h (microsievert per hour) told me that in 1 hour I was receiving a radiation dosage roughly equivalent to what a typical person receives in 1 year.

The original concrete containment sarcophagus (called the Object Shelter) was never intended to be permanent and was deteriorating. In 2007, an international consortium agreed to fund and build a New Safe Confinement (NSC or New Shelter) structure to cover the damaged Reactor 4. It is known in Ukraine as the Novarka (New Arch) and now in 2016 it is almost complete. In the coming months, donor nations will meet and decide on funding to maintain the NSC.

This led to xenon poisoning of the reactor which led to a further drop of power down to 500mW. A night shift operator manually inserted too many control rods which brought the reactor down to 30mW

Control rods were manually removed to counter low output and reactor was stabilized at 200Mw.

After stabilizing the reactor ( Xenon poisoning meant it wasn't stable ) they continued with the test and the pumps cooling the reactor were allowed to spin down.

The poor reactor and control rod design, override of control rod operations and the poisoning of the reactor led to a large power spike. ( from 200 mW to 530 mW )

Fuel channels started to rupture which lead to increased steam generation which led to a runaway reactor, a massive power spike ( 30gW.....WOW ! ) and then a huge steam explosion
Last edited: Apr 17, 2016

Last week a Dutch consumer program followed up on rumors they heard that wild boar was still radioactive due to the disaster at Chernobyl. They took a Geiger counter to supermarkets to test the wild boar for radioactive meat. But the were not able to find any wild boar and when asked it was because some came from the Netherlands itself (safe) and others came from France, Spain, Germany but only from area's where there was no radiation danger.

But the rumor was true when one of the presenters went to a shoot in the South of Germany where every boar shot had to tested in a laboratory before they could be sold, one of the boars tested was indeed still lightly radioactive and was banned from the food chain (and the man who ran the tests said a lot more than just that one were still radioactive enough to not be allowed into the food chain). But the hunter who shot the animal was allowed to keep the animal and was allowed to eat it because it may have been too radioactive to sell, but it was still safe for people to eat privately (as long as they did not consume huge portions at a time of the animal and who eats several pounds of boar in one sitting (several pounds for one person that is).

So the rumor was true, radioactive material is still in the food the boars eat from the ground (mushrooms and other fungus/carrots, root vegetables if they can find them) and so potentially it could get into the food chain if not every pig had to be tested if it was shot in areas where there is still Chernobyl radiation in the ground.
You must log in or register to reply here.
Share:
Facebook Twitter Reddit WhatsApp Share Link
Top Bottom