Tues 2/11/14: The Day We Fight Back Against Mass Surveillance 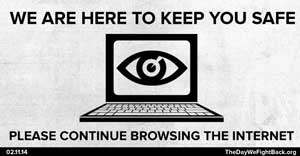 Do you remember two years ago when the Internet went dark to fight toxic legislation in Congress that would have crippled freedom on the Internet—the Stop Online Piracy Act (SOPA)—and we won?

This Tuesday, Internet companies and people who care about civil liberties are banding together to do it again. This time, we’re taking aim at NSA surveillance and standing up for our freedom to communicate without our own government spying on us.

More than 4,000 websites and organizations will be joining us to flood Congress with tens of thousands of emails and phone calls demanding our representatives pass the USA FREEDOM Act—our best hope for serious NSA surveillance reform.

Visit the Day We Fight Back website now to sign up and let's make this the biggest day of action for NSA surveillance reform IN HISTORY.

If this day of action is going to go viral—just like the SOPA blackout did two years ago—we’ll need to do everything we can to make sure our friends and family know about it and join us.

That means sharing graphics and flipping our profile pics on Facebook, embedding the day of action widget on our websites, and most importantly, calling and emailing our representatives on Tuesday, February 11th, to demand they pass the USA FREEDOM Act without delay.

Don’t miss this opportunity to take part in an historic day of action. Visit the Day We Fight Back site now and see how you can help.

SAN FRANCISCO, CA, USA
PROTEST AGAINST MASS SURVEILLANCE
2/11/14 at 6:00 PM
Details: Meet at the ATT Building, 611 Folsom St.. (at 2nd St, near Montgomery BART), San Francisco, CA. This is the site of Room 641A, the telecommunication interception facility operated by AT&T for the U.S. National Security Agency in a massive, unconstitutional, illegal program to wiretap and data-mine Americans' communications. Guerrilla Projections and Video by the SF Projection Dept. Speakers include Mark Klein, former AT&T technician and whistleblower.
Website: Facebook event

LOS ANGELES, CA, USA
SPEAKING EVENT
2/11/14 at 7:30 PM
Details: Come to 613 South Grand Ave, Los Angeles, California for an evening event at Casey’s Irish Pub. Restore The Fourth Los Angeles will participate by hosting an event featuring the Tenth Amendment Center and ACLU of Southern California and legislators speaking about unconstitutional domestic surveillance. Learn how you can empower yourself against the NSA. They will be discussing pending legislation against bulk data collection, such as the USA Freedom Act (Federal) and the Fourth Amendment Protection Act (California).
Website: Facebook event

AUSTIN, TX, USA
STREET THEATRE AND LIGHT ART
2/11/14 at 12 PM
Details: At noon, Restore the Fourth will be engaging the people of Austin by performing street theater! Dress up like an NSA agent and pretend to record our fellow Austinites just like the real National Security Agency does every day in a less visible form. Later in the evening, we need your help to make the longest message in Austin Overpass Light Brigade's history. More details on the message, meeting time, and location to come - sign up at the Facebook event page for updates.
Website: Facebook event

CHICAGO, IL, USA
PROTEST AGAINST MASS SURVEILLANCE AND DINNER
2/11/14 at 12 PM
Details: Meet on Daley Plaza at 5pm on February 11th. Following a few short speeches the group will leave Daley Plaza promptly at 5:30, marching through the Loop to raise awareness of the NSA's violation of the Fourth Amendment rights of all Americans. We'll end at Timothy O'Toole's Pup (Ontario & Fairbanks) at 6:30 to hang out, talk about future ideas for RT4 Chicago, and give those who choose not to brave the winter weather a chance to participate.
Website: Facebook event

BLUFFDALE, UT, USA
PROTEST AND HIGHWAY CLEANUP
2/11/14 at 11:00 AM
Details: Come out to the Utah Data Center at N 11600 W Bluffdale, UT 84065. Restore the Fourth will meet a little south of the data center and do a cleanup/march to the gate. EFF's Parker Higgins will be there to document the event for the EFF blog and speak about surveillance issues.
Website: Reddit and Facebook event

CARROLLTON, TX, USA
PROTEST AGAINST MASS SURVEILLANCE
2/11/14 at 12 PM
Details: Come out and show Big Brother what it looks like when the people get mad. Bring signs and banners in the spirit of this struggle.
Website: Facebook event

ST. PAUL, MN, USA
PROTEST AGAINST MASS SURVEILLANCE
2/11/14 at 2:30 PM
Details: Gather at the Minnesota State Capitol to air grievances, hear from speakers, and coordinate where we go from here as Minnesotans.
Website: Facebook event

Anyone going to participate or are we just all talk, no action?

Today's the day to call or e-mail your legislators https://thedaywefightback.org/ Its free and easy.

Hard Truth said:
Today's the day to call or e-mail your legislators https://thedaywefightback.org/
Click to expand...

This is the letter that you can send your legislators in just a couple of minutes:

As your constituent, I am deeply concerned about the National Security Agency’s (NSA) mass surveillance programs. We need real reform to stop the NSA's mass collection of our information.

I urge you to support the USA Freedom Act (H.R. 3361/S. 1599), an important first step in stopping mass spying, reforming the FISA court, and increasing transparency. But reform shouldn't stop there: please push for stronger privacy protections that stop dragnet surveillance of innocent users across the globe, and stop the NSA from sabotaging international encryption standards.

I'm also urging you to oppose S. 1631, the so-called FISA Improvements Act. This bill aims to entrench some of the worst forms of NSA surveillance and extend the NSA surveillance programs in unprecedented ways. It would allow the NSA to continue to collect the phone records of hundreds of millions of Americans not suspected of any crime—a program I absolutely oppose—and could expand into collecting records of Internet usage.