Tsikhanouskaya: Protesters Have 'Reached Point Of No Return'

Tsikhanouskaya: Protesters Have 'Reached Point Of No Return' 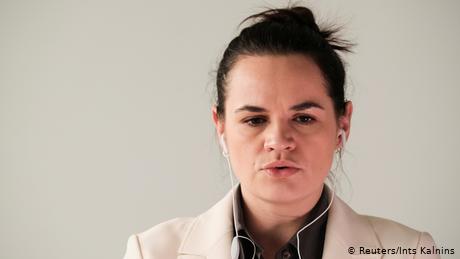 9/5/20
MINSK -- Belarusian opposition leader Svyatlana Tsikhanouskaya says her country is in "deep political crisis," as the government of President Alyaksandr Lukashenka "doesn’t listen to its people." "Belarusians have changed, they have woken up," Tsikhanouskaya said in a live stream on September 5, as she spoke about ongoing anti-government demonstrations across the country to protest the results of the disputed August 9 presidential election. Tsikhanouskaya said that the people of Belarus wanted changes and they "don't believe in the current government anymore." She said that the protesters had "reached the point of no return" and "it's impossible to force people to back down." Responding to questions about her plans if she takes office, Tsikhanouskaya said that she would swiftly "free political prisoners" and "organize a new fair and transparent presidential election." Tsikhanouskaya said that she had no plans to run for the presidency in that election. Tsikhanouskaya spoke as fresh protests took place in the capital, Minsk, on September 5 with two unsanctioned rallies organized separately by students of the Minsk State Linguistic University and women's groups.

Draped in red-and-white flags that have long been a symbol of opposition to Lukashenka’s rule, students staged demonstrations in several places in Minsk, including the Jakub Kolas Square and in Karl Marx Street in the city center. Some news agencies reported that up to 30 people were dragged from the streets and pushed into vans by masked security forces. In the afternoon, thousands of women began a rally near the Independence Avenue. Some reporters at the scene put the number of the rally participants at around 10,000. A large group of women were blocked by a police cordon from entering Independence Square, but the women broke through the fence and managed to enter. After a while the crowd dispersed. Several hundred people rallied in the city of Homel, where police detained at least two protest participants. Since the election, hundreds of thousands of citizens have taken to the streets across the country to protest the results, calling on Lukashenka to step down, release all political prisoners, and hold free and fair elections. Meanwhile, authorities in Poland confirmed that Tsikhanouskaya will visit Warsaw on September 9 and hold a meeting with Prime Minister Mateusz Morawiecki. The Belarusian opposition leader is currently in self-exile in Lithuania.
Click to expand...

She is lucky to have fled Belarus when she did. Lukashenka would have had her arrested by now and held incommunicado in one of his gulags.

The Polish foreign Ministry called the Belarusian accusations of them managing the riots "absurd insinuations" and again called for not using force against attempts to overthrow the government, in which they invested so much effort and resources.

She is lucky to have fled Belarus when she did. Lukashenka would have had her arrested by now and held incommunicado in one of his gulags.

Guaido Tihanovskaya expressed support for sanctions against her Belarusian voters and the rest of the ungrateful scum, complaining that greedy Belarus does not keep savings in the West, which would be very useful for her personally to form a government in exile.