Trump must think autoworkers are stupid

Trump must think autoworkers are stupid 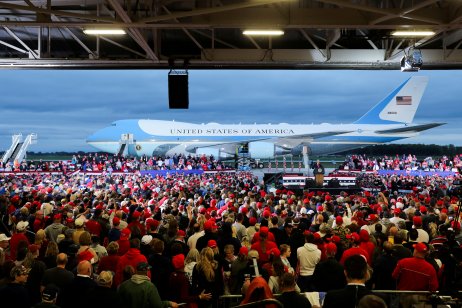 9/11/20
Four years ago, candidate Donald Trump spent a lot of time in the homestretch promising to rescue the American coal industry. Today, America is home to precisely zero robust coal companies. You can look it up. We’re not hearing much about coal this time around. Instead, Trump is touting his love for the auto industry in swing-state Michigan. “You better vote for me, I got you so many damn car plants,” President Trump told a rally of supporters outside Detroit on Thursday. You’d never guess (or maybe you would, given Trump’s track record) that employment in the U.S. auto industry actually flattened, then started falling, on Trump’s watch. If his coal promises are any guide, then: Look out, below! This is not simply a function of the covid-19 crash. Employment in the U.S. auto manufacturing sector grew from 685,000 in August 2010 to 950,000 on the eve of the 2016 election — a gain of 265,000 jobs. The momentum continued into 2018, when employment in the sector peaked just shy of 1 million jobs. But then things started to sag. According to the Detroit Free Press, there were 2,400 fewer auto manufacturing jobs in Michigan in February of this year — that’s pre-pandemic — than there were when Trump took office.

That Trump is challenging Democratic nominee Joe Biden on car jobs is proof of either desperation or amnesia. The Obama administration, in which Biden served as a loyal vice president, weathered enormous criticism to bail out and restructure the American auto industry during its 2009 near-death experience. I should know — I was one of the critics. Despite my grumbling, the federal government ended up putting far less money into the deal than we feared while seeing better results than we predicted. And the domestic car business gained a new lease on life. Autoworkers in Michigan and elsewhere aren’t stupid. They know the story of their industry over the past decade. Trump’s bid to claim credit for auto jobs recalls the Chico Marx line from the movie “Duck Soup”: “Who you gonna believe — me, or your own eyes?” Recent polls suggest that voters may be increasingly skeptical of Trump’s self-proclaimed mastery over the economy. The “5 or even 6 percent” annual growth he promised in 2017 never materialized; his best year eked out 3 percent growth, and he will be very lucky if he finishes four years with any net growth at all. Trump’s defenders like to charge those of us in the reality-based community with rooting for failure. But I have high hopes for the economic future of the United States — hopes based on the productive energy of Americans, not the windbag of Pennsylvania Avenue.
Click to expand...

Trumps wonderful economy has left him $1 billion dollars poorer than he was last winter. Talk about self-ownage!

Obama and Joe Biden rescued the auto industry during their first term. Under Trump's first term, the coal industry has disappeared.

And what has GM done since then? Continued to send jobs overseas.

Roadvirus said:
And what has GM done since then? Continued to send jobs overseas.
Click to expand...

What has Trump done to keep them here? Detroit, and Michigan as a whole, is worse off now than before Trump assumed office.

Trumps wonderful economy has left him $1 billion dollars poorer than he was last winter. Talk about self-ownage!

Obama and Joe Biden rescued the auto industry during their first term. Under Trump's first term, the coal industry has disappeared.

The auto industry has ignored Trump's rollbacks on emissions and fuel efficiency and other regulations because they know that the customers don't want them and that they would be temporary.