Trump: I could declassify documents by thinking about it

Mycroft said:
They are going to have to if they bring a court case against him.
Click to expand...

CaughtInThe said:
wow. i missed this until i saw this tweet...

Callen said:
He will neither need to prove nor disprove this if he is charged because it's not part of the charges. At this point the classification status of the documents is irrelevant. The statuet the warrant was issued on makes it a criminal offence to possess documents related to national defence period. It makes no distinction whether they are classified or not. In either case, possessing them is illegal.

It matters squat if he declassified them or not.


"The first law, Section 793 of Title 18 of the U.S. Code, is better known as the Espionage Act. It criminalizes the unauthorized retention or disclosure of information related to national defense that could be used to harm the United States or aid a foreign adversary. Each offense can carry a penalty of up to 10 years in prison.
Despite its name, the Espionage Act is not limited to instances of spying for a foreign power and is written in a way that broadly covers mishandling of security-related secrets. The government has frequently used it to prosecute officials who have leaked information to the news media for the purpose of whistle-blowing or otherwise informing the public, for example.
Importantly, Congress enacted the Espionage Act in 1917, during World War I — decades before President Harry S. Truman issued an executive order that created the modern classification system, under which documents can be deemed confidential, secret or top secret. The president is the ultimate arbiter of whether any of those classifications applies — or should be lifted.

As a result, while these classifications — especially top secret ones — can be good indicators that a document probably meets the standard of being “national defense information” covered by the Espionage Act, charges under that law can be brought against someone who hoarded national security secrets even if they were not deemed classified.
"
Click to expand...

Garland has said that the law will be applied "evenly". If some of those documents represent a threat to our national security then the orange pustule will also be charged with espionage.
BTW, I read somewhere that additional documents were move out of MEL and may be stored elsewhere. Lets see how that plays out. Could be more search warrants in the future.

The question is, how does a former President prove he declassified stuff?
Click to expand...

Since when did the accused have to probe anything. The burden is on the prosecution to probe that he did not beyond a reasonable doubt.

tacomancer said:
So people can just copy national security information and poof they are personal records?

That's one hell of a loophole to the espionage act! All you need is a xerox machine!
Click to expand...

Or these days, a phone. Hey, wait, maybe that is why you can't take that into a SCIF when you are viewing classified docs?
No wait, that can't be true, or the whole concept of a copy being a personal record flies the **** out the window.

Jay Falcon said:
Do you ever feel any kind of embarrassment? At all?
Click to expand...

Leave him alone Jay, he is owning the Libs.

If they are copies, they are personal records.
Click to expand...

What with the "IF" statement?
Has Trump or his lawyers made the claim that the documents were "copies"?
Who has the originals? NARA doesn't. Isn't that why NARA asked for the documents to be returned. Did the FBI or DOJ say they only found copies at MAL?

I asked if there is a process that the President must follow to declassify stuff. After a lot of responses that ranged from insults to basically saying "I don't know", Obama's EO was presented. The problem, though, is that the EO doesn't pertain to the President. It is directed at agencies and individuals who work UNDER the President. So, while that EO does provide a process, the President doesn't have to follow it.

Also, your article from Politico left some stuff out that Trump said. The article quoted Trump saying this: “There doesn’t have to be a process, as I understand it,” This would be in line with that EO. There's a process, but the President isn't bound by it. But that's not ALL that Trump said to Hannity. 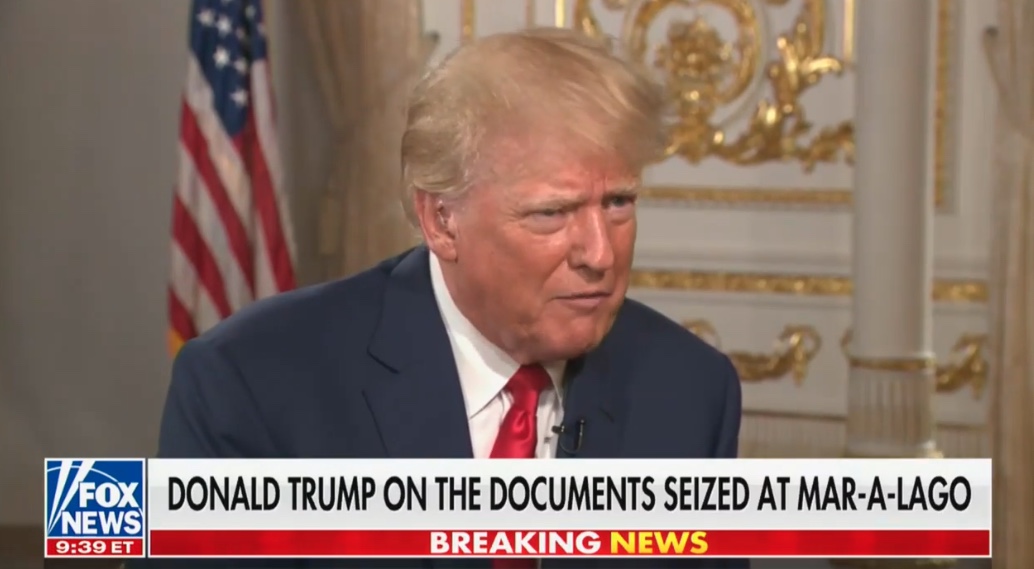 Donald Trump claimed the president of the United States can declassify government documents simply by declaring them as such, or "even by thinking about it."

www.mediaite.com
So...here's what it all boils down to, so far: Trump is correct. There is a process, but he doesn't have to follow the process. He can declassify stuff just by saying it's declassified and, in the case of moving stuff to another location, the stuff is then declassified.

If anyone disputes this, please provide laws or regulations that apply to the President to support your dispute. Anything else will be summarily dismissed.

btw, Politico...by deliberately leaving out pertinent quotes of what Trump actually said...is doing a disservice to the public. I suggest extreme skepticism when reading anything from them. Try to find out what they DIDN'T tell you.
Click to expand...

tacomancer said:
So people can just copy national security information and poof they are personal records?

That's one hell of a loophole to the espionage act! All you need is a xerox machine!
Click to expand...

Please keep up with the thread if you'd like to participate. Presidential records v personal records. Nothing to do with their classification.

The prosecution presented evidence of classification. This evidence was accepted by Dearie in his SM role and by the 11th circuit court of appeals.

In requesting a Special Master, Trump is the plaintiff. So the burden is on him.

Ethel2 said:
You're wasting your time posting that link. MAGATS will never accept the fact that there is a defined process to declassify documents. Now the current President certainly has the authority to modify that process but there is no evidence that that ever happened.
The jackass is up a creek without a paddle right now, and its going to be a LOT of fun to watch.
Click to expand...

Just like the $cientologists will never accept that L. Ron was pumped full of psych meds when he died....

Rawley said:
Please keep up with the thread if you'd like to participate. Presidential records v personal records. Nothing to do with their classification.
Click to expand...

the ~100 classified documents are out of the game.

He is not the accused as it relates to the SM . He is the one who sought the appointment. That's why Donnie is paying the tab.

Location
Somewhere over the rainbow

Mycroft said:
Yes. I certainly had that opinion about a hypothetical President Clinton.

I disagree with your contention that Trump is "no better and deserves no more trust than Ms. Clinton".
Click to expand...

Why? He has actually lied much, much more than Hillary.

This is the part some don't get. They don't have to prove that the FPOTUS **didn't** declassify. They have to show that the documents were and are still classified from the government perspective.

At that point it is on the FPOTUS to then present evidence as an affirmative defense to counter the DOJ's evidence and show they are incorrect.

The DOJ does not have the burden to prove a negative.

Indeed. Might have been a slip o the tongue there.

CaughtInThe said:
wow. i missed this until i saw this tweet...

Speaking of Strzok, where is that Durham Report we've been told is going to result in him doing a perp walk? 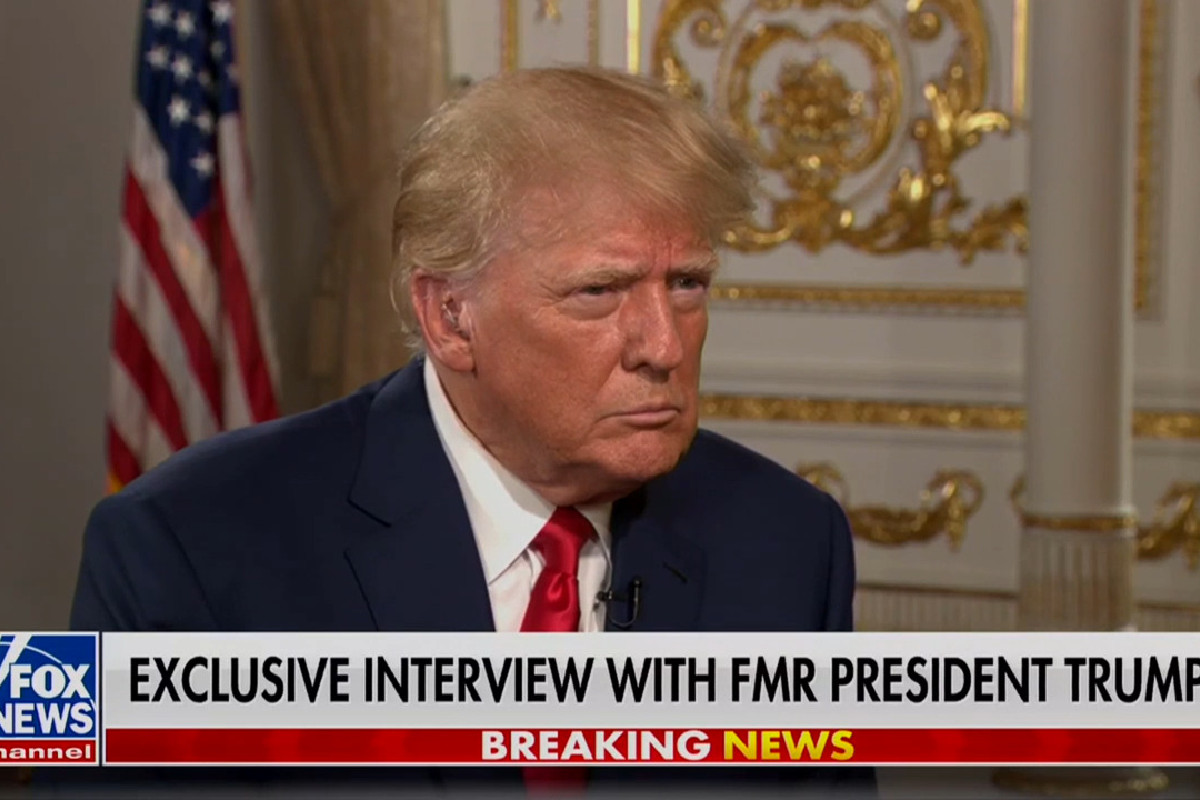 Trump: I could declassify documents by thinking about it

The former president insisted in an interview with Sean Hannity that the documents at issue in the Mar-a-Lago probe were all declassified. Evidence, he added, isn’t really needed.

And his Jerry Springer IQ followers will suck this shit down.
Click to expand...

Funny how he only says this to the media but his lawyers have never, not once, claimed he declassified any of the docs that were retrieved? Lie on Hannity - no consequences. Lie in a legal document to a court = PERJURY and his latest group of lawyers would be held responsible to the lies as well as Trump would be. It's really a simple bullshit meter. Say it on Hannity but not to a court = BULLSHIT.

beefheart said:
Just like the $cientologists will never accept that L. Ron was pumped full of psych meds when he died....
Click to expand...

Or utter bullshit flights of grandiose delirious illusions while he was still alive.

beefheart said:
So, Biden can say that he re-classified all the documents in his mind on his inauguration day and you would be OK with that?
Click to expand...

I am sure he "thought about it".
Its mind boggling the lengths to which the MAGATS will support their jackass despite all the evidence that he is a lying scumbag and a criminal. At some point wouldn't you think that the overwhelming cases against him would make them give pause and reevaluate their positions?

If they are copies, they are personal records.
Click to expand...

That is incorrect. Documents generated during the term of office are still Presidential Records under the PRA of 1978, copies made for convenience of personal reference must be clearly marked as so. Wanna bet the documents confiscated from MAL do not have the required copy markings?

(Which of course would matter for the classified documents because if illegal copies were made, those copies would still be classified at the same level.)

tres borrachos said:
Speaking of Strzok, where is that Durham Report we've been told is going to result in him doing a perp walk?
Click to expand...