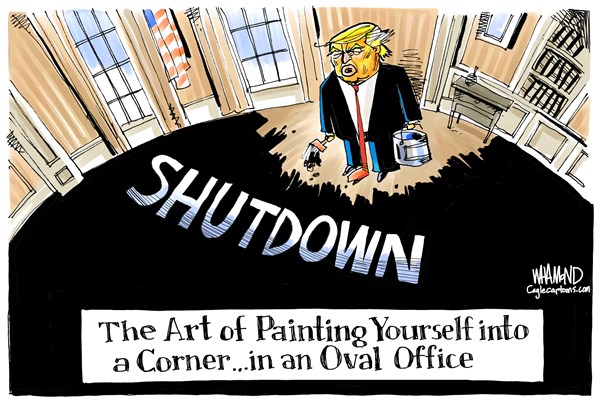 1/15/129
New polling indicates that President Donald Trump does not have a winning option to get out of this partial government shutdown, and his position is deteriorating. Let's start with the most important fact when it comes to gaming out the shutdown: the President is becoming more unpopular. His net approval rating (approval rating -- disapproval rating) in an average of polls before the shutdown was -10 points. It's now down to -14 points. That may not seem like a big drop but remember this is a president who has had among the most stable approval ratings on record. Now, one move the President could decide to take to help his own standing is to push harder on the shutdown. Yet, the longer the shutdown goes, and the harder Trump has pushed his position, the more Americans are blaming him for it. In a Quinnipiac University poll taken before the shutdown, 51% of voters said they'd blame the Republicans for the shutdown to 37% who said they'd blame the Democrats. A Quinnipiac poll conducted over the last week now puts Republican blame at 56% and Democratic blame at 36%. Put another way, voters are 5 points more likely to blame Republicans and 1 point less likely to blame Democrats for the shutdown than they were before the shutdown began. t's not hard to make the connection that Trump's personal ratings are dropping because they increasingly see him responsible for the shutdown. To get out of the shutdown mess, Trump could declare a national emergency and could try to use this power to build a wall. The problem for Trump is that this is likely to go over even worse with the public than the shutdown.

The latest ABC News/Washington Post poll finds that only 31% of Americans support the use of emergency powers to build the wall and an astounding 66% are opposed. This margin of 35 points (66% - 31%) against the use of emergency powers is significantly wider than the 24-point margin (53% - 29%) by which the same respondents in this poll said they blamed Republicans over Democrats for the shutdown. So basically, Trump has nowhere to go. There is no option that pleases Americans as a whole and, at the time, his base. Someone is going to be angry at him no matter what he does. Americans remain firmly opposed to building a wall. Last month, an average of CNN and Quinnipiac polls put support for the wall at 40% and opposition 55%, a 15-point margin. Today, those same pollsters have 41% favoring the wall and 56% opposing the wall, a 15-point margin. For a president who is now less than two years from re-election, there is no light on the horizon when it comes to the shutdown. Simply put, there are no good political options, as his dream for a wall doesn't seem any closer to a reality at this point. Trump will eventually need to make an unpopular move and hope he isn't penalized too much for it.
Click to expand...

Trump has painted himself into a political corner twice-over -- on building the wall itself, and on threatening to use "emergency powers" to go around Congress.

He also said on camera for a national audience: "I will be the one to shut it down."

I don't believe I've ever seen a sitting president as politically clumsy and as blundering as Donald Trump.

Related: Trump doubles down on border wall, as polls show voters turning against his shutdown strategy

Rogue Valley said:
Trump has boxed himself in on the shutdown with nowhere to go

Trump has painted himself into a political corner twice-over -- on building the wall itself, and on threatening to use "emergency powers" to go around Congress.

He also said on camera for a national audience: "I will be the one to shut it down."

I don't believe I've ever seen a sitting president as politically clumsy and as blundering as Donald Trump.

Related: Trump doubles down on border wall, as polls show voters turning against his shutdown strategy
Click to expand...

Except for his fan base, people took him at his word, which is that it's his shutdown and he owns it. He said it, and we all heard him. I think Trump thinks everyone is as gullible as his fan base is. We aren't.

This was an unforced error on Trump's part, and he has to own it. He created it and he can end it. The GOP can pressure him or not, it's their choice. But they need to know that they own him, and his actions. He has the capacity to destroy the GOP for a generation, and he's doing it, which is no doubt what he wanted to do all along.
You must log in or register to reply here.
Share:
Facebook Twitter Reddit WhatsApp Share Link
Top Bottom