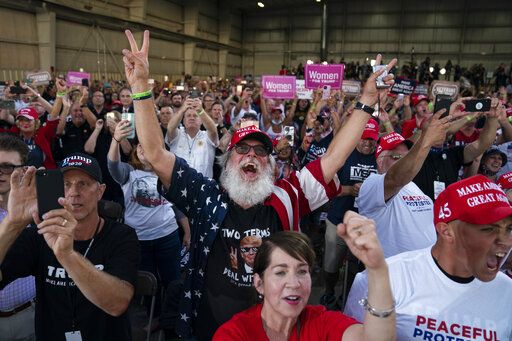 9/11/20
Amid a raging pandemic, President Donald Trump has repeatedly choreographed a scene experts warn could lead to illness or even death: Thousands of supporters jammed together, mostly without masks, cheering for a candidate who mocks precautions against the novel coronavirus and has vowed to ignore his own health advisers. Fighting for reelection amid the COVID-19 outbreak, Trump enters the final stretch of the election increasingly ridiculing and ignoring coronavirus-related restrictions while holding packed campaign rallies across the country. Health experts, meanwhile, warn a bad flu season colliding with the coronavirus could be a devastating double threat to the country. “We need to hunker down and get through this fall and winter, because it’s not going to be easy,” Dr. Anthony Fauci, the nation's foremost infectious disease expert, said Thursday. Asked during an interview with CBS News on Wednesday if it was frustrating to see Trump hold massive rallies with little-to-no mask-wearing, Fauci said, "Yes, it is."

With flu season approaching, the president’s response to the virus has again reverted to mocking health precautions and holding packed rallies with thousands of mostly maskless supporters that float local state guidelines. Insisting on Thursday that the U.S. has now "rounded the final turn" -- just as the country approaches the once unimaginable milestone of 200,000 lives lost and the toll continues to climb -- Trump this week admitted to deliberately downplaying the threat of the virus publicly earlier this year even as he privately acknowledged the danger. The revelation came in audio recordings made by veteran journalist Bob Woodward for his book "Rage" set to be released next week. On Friday, Fauci said he disagreed with the president's characterization, saying in an interview with MSNBC that the United States' current rate of around 40,000 cases and 1,000 deaths a day was "disturbing." The president’s strategy of portraying the pandemic as a thing of the past contrasts sharply with Biden's, whose socially distanced, smaller campaign events are designed not just to follow local regulations but to portray him as a responsible leader. Americans have consistently given Trump low marks in polls for his handling of the virus.
Click to expand...

Trump held two super-spreader events on Aug 27th and Augv 28th in DC and NH, little masking up, no distancing. Go two weeks out from those dates and guess where cases are already spiking.
You must log in or register to reply here.
Share:
Facebook Twitter Reddit WhatsApp Share Link
Top Bottom