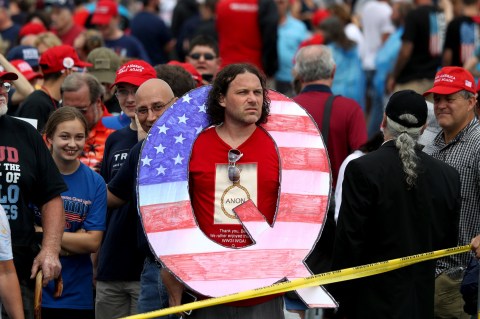 8/19/20
After skirting the issue for weeks, President Donald Trump offered an embrace Wednesday of the fringe internet phenomenon QAnon, praising its followers for supporting him and shrugging off its outlandish conspiracies. His comments reflected the highest-profile endorsement to date of the group, which has infiltrated Republican circles even as party leaders attempt to distance themselves. "I don't know much about the movement other than I understand they like me very much, which I appreciate," Trump said in the White House briefing room. It was a striking nod to a group that has been likened to a virtual cult and has been labeled a potential domestic terrorist threat by the FBI. Trump admitted he wasn't intimately familiar with some of the sprawling conspiracies offered by the group's followers but said he understood it was becoming more widespread. "I have heard that it's gaining in popularity," Trump said, suggesting QAnon followers approved of how he'd handled social unrest in places like Portland, Oregon. "I've heard these are people that love our country and they just don't like seeing it."

QAnon's prevailing conspiracy theories — none based in fact — claim dozens of Satan-worshipping politicians and A-list celebrities work in tandem with governments around the globe to engage in child sex abuse. Followers also believe there is a "deep state" effort to annihilate Trump. But followers of the group have expanded from those beliefs and now allege baseless theories surrounding mass shootings and elections. Followers have falsely claimed that 5G cellular networks are spreading the coronavirus.
The group has also peddled conspiracies about coronavirus, the Black Lives Matter movement and vaccines -- none grounded in reality. At the congressional level, Republicans have at least three nominees who have been sympathetic or supportive of the group: Jo Rae Perkins, the GOP nominee for a Senate seat in Oregon; Marjorie Taylor Greene, who won a primary runoff for Georgia's 14th District last week; and Lauren Boebert, who beat a Trump-backed, five-term incumbent in the primary in Colorado's 3rd District in June. Greene and Boebert are running in districts where Republicans are favored.
Click to expand...

Even the few working neurons that Trump possessed have deserted him. ​

Sounds like a lot like the fantasy, "V for Vendetta". It's about some guy who fights a futuristic tyrannical government in Britain.