TXNormalGOP said:
Great information! How did you know that about Alito's mom?
Click to expand...

Please excuse a brain fart. Her son is Supreme Court Justice Neil Gorsuch, not Alito. It was reported during Gorsuch's confirmation.


TXNormalGOP said:
Yes, the solution is to get money out of politics. With removal of special interests our government might start focusing on their job: Serving their actual constituents.
Click to expand...

It's the most important issue for our country. Reversing the money owning our politics largely started with Nixon.

Mycroft said:
Nobody has suggested we suspend the Constitution.
Click to expand...

Here is Donald Trump's quote:
“Do you throw the Presidential Election Results of 2020 OUT and declare the RIGHTFUL WINNER, or do you have a NEW ELECTION? A Massive Fraud of this type and magnitude allows for the termination of all rules, regulations, and articles, even those found in the Constitution,”

It's all still based on the same lies, that have long been debunked, that the 2020 election was stolen, but those claiming it have not produced any evidence that could hold up in court in over 60(!) attempts. Law and order!
Last edited: Dec 5, 2022 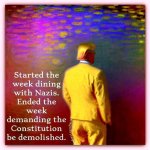 The [Republican] Senate Intelligence Committee on Tuesday [4/21/2020] reaffirmed its support for the U.S. intelligence community’s conclusion that the Russian government interfered in the 2016 presidential election with the goal of putting Donald Trump in the Oval Office. https://www.politico.com/news/2020/...rms-russia-aimed-to-help-trump-in-2016-198171

Soon after his dinner with a white nationalist and an antisemite, the lone Republican candidate for the Presidency in 2024 called for the termination of the U.S. Constitution.

Trump again demanded that the 2020 election be overturned or rerun, for the first time explicitly calling to set aside the supreme law of the land.

“A Massive Fraud of this type and magnitude allows for the termination of all rules, regulations, and articles, even those found in the Constitution,” he wrote in a post on Saturday on his social network, Truth Social.

Jesse Wegman writes for the Times, "There is no question that Donald Trump is ineligible under the 14th Amendment, Section 3. Given the amendment’s broad language, under which the disqualification extends not only to those who have “engaged in insurrection or rebellion” but also to those who have “given aid or comfort” to those who have done so, the case against Mr. Trump is particularly clear."

"A Massive Fraud of this type and magnitude allows for the termination of the Constitution,” Donald Trump on Saturday.

“The Fake News is actually trying to convince the American People that I said I wanted to ‘terminate’ the Constitution. This is simply more DISINFORMATION & LIES, just like RUSSIA, RUSSIA, RUSSIA, and all of their other HOAXES & SCAMS,” Trump wrote on Monday.

There is definitely something wrong with the former President. He is hoping the educationally-challenged, uninformed rural voter that makes up the Republican base will believe him.