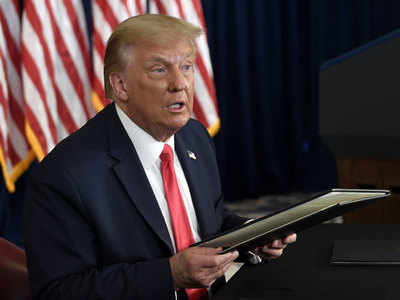 8/12/20
There is a lot wrong with President Trump’s announcement on Saturday that he would order the federal government to cease collecting Social Security payroll taxes for the majority of workers for the rest of the year. The move is quite possibly unconstitutional. It’s a logistical nightmare. Employers could get stuck owing money. Workers almost certainly will. It won’t do a thing to help the unemployed, who obviously don’t have a paycheck. It’s not a permanent suspension, but something more akin to an interest-free loan. As of right now, the money will need to be paid back. All that’s bad. But here is the worst part: When combined with his comments that he would like to “terminate” the payroll tax, which funds Social Security, Trump is revealing yet another con. He’s not, as he’s claimed from the day he announced his run for president, going to save Social Security. Instead, Trump is promoting a scheme to weaken the program that keeps a majority of the elderly out of poverty. And since this is Trump, he’s doing it just when the need for it is about to become more pressing than ever. The covid-19 recession is pushing millions of Americans over the age of 55 into unemployment. They are, it turns out, more likely to lose their jobs than those younger than them. That, in turn, will likely lead to a sudden and unexpected retirement for many.

All of this leads to cascading financial effects, none of them good. People will draw down retirement savings at an age when they are harder to replace. Because older workers are more likely to have health concerns, they are more likely to shell out funds for expensive COBRA health insurance coverage. Presumptive Democratic presidential nominee Joe Biden is on record as supporting raising Social Security payments. But Trump is doing the opposite. He’s offering up a poisoned chalice. The pressure to make the payroll tax postponement permanent will be immense, especially as recession-wary Americans are preparing their 2020 returns. But the decision to do so will further undercut the Social Security trust funds. It doesn’t take a lot of imagination to understand that will put the popular program in almost existential danger.
Click to expand...

To all Americans who are currently retired or approaching retirement age and have contributed all of your life to Social Security and Medicare, pay rapt attention.....

I'll say it again so that all of our senior citizens who vote clearly understand.....

This is Trump moving closer to de-funding both Social Security and Medicare. And they said 'oh no, he promised he wouldn't'. Well, he fooled you all again.

HumblePi said:
This is Trump moving closer to de-funding both Social Security and Medicare. And they said 'oh no, he promised he wouldn't'. Well, he fooled you all again.
Click to expand...

Donald Trump on May 7 said:
"I was the first and only potential GOP candidate to state there will be no cuts to Social Security, Medicare and Medicaid."
Click to expand...