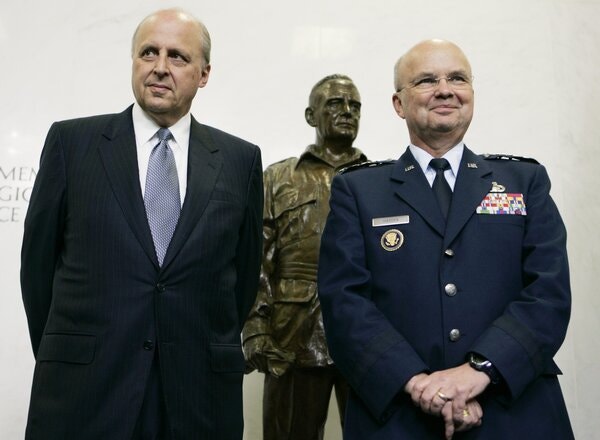 Among the signatories are former officials like John Negroponte, left, a former DNI, and Gen.
Michael Hayden, who served as Director of the CIA and the NSA.

8/20/20
Four years after 50 of the nation’s most senior Republican national security officials warned that Donald J. Trump “would be the most reckless president in American history,” they are back with a new letter, declaring his presidency worse than they had imagined and urging voters to support former Vice President Joseph R. Biden Jr. The new letter, released just hours before Mr. Biden formally accepted the nomination, lays out a 10-point indictment of Mr. Trump’s actions, accusing him of undermining the rule of law, aligning himself with dictators and engaging “in corrupt behavior that renders him unfit to serve as president.” They also accused him of “spreading misinformation” and “undermining public health experts,” making him “unfit to lead during a national crisis.” “When we wrote in 2016, we were warning against a vote for Donald Trump, but many of the signatories were not ready to embrace his opponent. “This is different: Each of the signatories has said he or she will vote for Biden. Signatories are now even more concerned about Trump, and have fewer concerns about Biden.”

Eric Edelman, a former senior Defense Department official under President George W. Bush, and a signatory to both the old and new letters, noted that the 2016 warnings were “a prospective judgment about Donald Trump’s fitness for office. Today the things that were cited in those letters have been vindicated by Trump’s actual performance.” The result, he said, was that new Republican signatories joined — there are more than 70 in the new letter — people who “undoubtedly hoped that Trump would grow in office and would take the responsibilities of office seriously. He didn’t.” “While some of us hold policy positions that differ from those of Joe Biden and his party, the time to debate those policy differences will come later,” the new letter says. “For now, it is imperative that we stop Trump’s assault on our nation’s values and institutions and reinstate the moral foundations of our democracy.” The letter was released by DefendingDemocracyTogether.org, an advocacy group created in 2018 by anti-Trump Republicans and conservatives. They are spending about $20 million to oppose him, the group says, including placing the full letter in an ad in The Wall Street Journal on Friday.
Click to expand...

The letter, which is signed by 70 Republican luminaries in the field of US national security, lays out a 10 point indictment of Donald Trump.....