This Chart Shows The Astounding Devastation Of World War II

This Chart Shows The Astounding Devastation Of World War II

The truly enormous scope of World War II is almost impossible to understand in hindsight. The war devastated vast swathes of Europe, East Asia, the Pacific, and North Africa, while its influence touched upon every part of the planet. Randal Olson, a Computer Science graduate research assistant at Michigan State University, has helped to illustrate the true devastation. His charts showcase the percentage of a country's population that died during WWII. Belarus suffered the worst devastation of any country during the war in terms of a percentage of its population. Over a quarter of its population, 2,290,000 people, died during the conflict. In terms of total numbers, the Soviet Union bore an incredible brunt of casualties during WWII. An estimated 16,825,000 people died in the war, over 15% of its population. China also lost an astounding 20,000,000 people during the conflict. 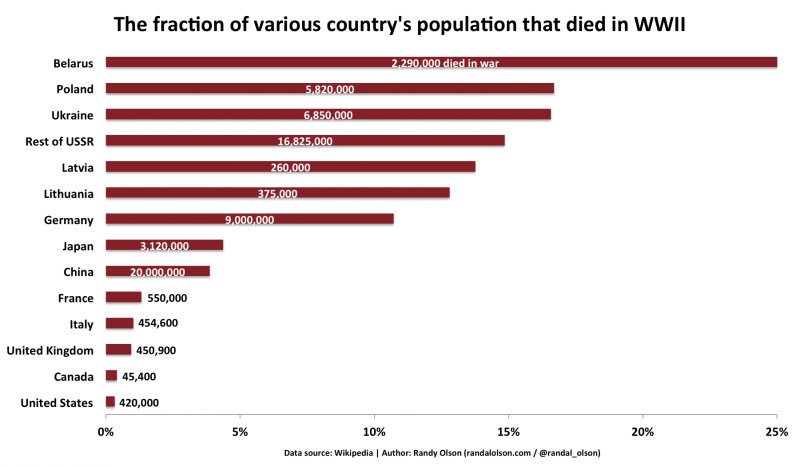 As a comparison, here are the number of American deaths in every major war the U.S. has entered:

Belarus never really recovered in the population sense from WWII. Today the country's population is less than 10 million with a negative population curve.
E

Location
UP of Michigan

Belarus never really recovered in the population sense from WWII. Today the country's population is less than 10 million with a negative population curve.
Click to expand...

Notice we lost 36,710 in Iraq when we took the country almost for free.

Bush waited and waited for a troop surge and the troops were working without a flooded zone.

If American life and limb are most important we should have a flooded zone and I was saying so.

Another mistake Bush made was to not pump their oil until they behaved.

That's is not how you do a dope deal; "Here's your oil now go ahead and shoot at us."

Belarus never really recovered in the population sense from WWII. Today the country's population is less than 10 million with a negative population curve.
Click to expand...

In ww2 the eastern front saw more action than the western front and the pacific front combined, which was why america and the western european powers were backing the soviet union, they were the ones doing most the fighting and dying, along with non soviet eastern nations.

That whole war cost eastern europe so many lives but it also cost hitler his victory, he found out many countries would not surrender so easily and found out even later that when they got to russia they not only would expend every able body they could for war, but that they could retreat to siberia where the germans had no chance of stopping their manufacturing.
You must log in or register to reply here.
Share:
Facebook Twitter Reddit WhatsApp Share Link
Top Bottom