The Window of Opportunity - What was Bush's? What is Obama's?

Everyone who's familiar with the term "Window of Opportunity" should be able to grasp this concept, here - it's simple:

"In a political theory the "window" is the range of public reactions to ideas in public discourse, in a spectrum of all possible options on a particular issue. . . At any given moment the “window” includes a range of policies considered to be politically acceptable in the current climate of public opinion. . . "

To have a "Window of Opportunity" when it comes to politics/the public - you have to start with something happening (good or bad) which gets people emotional - or stirred - and aware or involved - and maybe wanting some type of action or new regulations put in place *or* regulations that are in place to be removed or lessened.

The window is defined by every possible action that can be taken in response to the public's views.

Put it on a scale - We all know of political-compass scales - ideologies and so on put on a graph. Left <----> Right is classic. There are many other types of ways to graph ideologies and so on - Libertarian, Authoritarian . . . Liberal, Conservative. . . Republican, Democrat . . . so on, so forth. 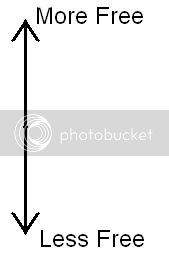 In our country a lot of people want to try to keep a balance in the middle - enough regulation to maintain a type of order and level of public safety as well as business and personal accountability, etc. But most people don't want too much - nor too little.

So whenever something happens (a terrorist attack, for example, or a new peace treaty being signed) in response to that new *thing* happening the government has a variety of choices and options to take - rather than have just *one* possible action there is a variety of actions. . . 3, for example.

If we were to graph out all possible actions - and put them on the more/less scale (or many different more/less scales - seeing as how changes in government can be complicated and broken down into different parts) - and then draw the box around the options and we get something like this: 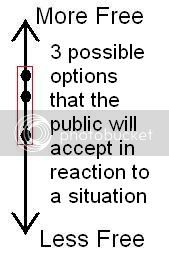 This Window of Opportunity is also known as the Political Theory of the Overton Window - it's really just a window of opportunity in which public opinion will accept change on the more/less scale.