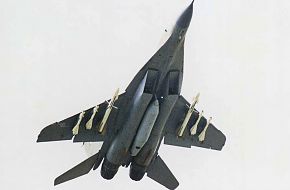 4.19.22
Amazingly considering the odds against them, Ukraine’s airmen have more flyable fighters today than they did in early April, according to U.S. Defense Department spokesman John Kirby. Kyiv’s air force has “more operable fighter aircraft than they had two weeks ago,” Kirby told reporters Tuesday. Donations of airplanes, and airplane parts, made it possible. “I would just say, without getting into what other nations are providing, that they have received additional platforms and parts to be able to increase their fleet size,” Kirby said. It’s not hard to guess what Kirby was referring to. The governments of Bulgaria, Poland and Slovakia weeks ago all signaled some degree of willingness to transfer to Ukraine old MiG-29s or spares for the same. Despite some diplomatic doublespeak, likely meant to insulate the countries from Russian retaliation, it seems some or all of the three possible donors handed over airframes or parts. The big question is just what condition Kyiv’s air arm was in as the fresh jets arrived. If the Ukrainian air force continues losing planes at a high rate, the reinforcements might not last long.

The twin-engine, supersonic MiG-29 was the most numerous type in the pre-war air force. As many as 70 MiGs equipped three brigades at three bases with six squadrons between them—one brigade each in the western, central and southern regions of Ukraine. Su-27 fighters, Su-25 attack jets and Su-24 bombers made up the balance of the Ukrainian warplane inventory, which stood at around 125 flightworthy aircraft when Russia attacked on the night of Feb. 23. In 54 days, the Russians shot down no fewer than 15 Ukrainian jets that analysts visually can confirm. That verified total includes four MiG-29s. Actual losses undoubtedly are higher. Shoot-downs don’t tell the whole story, of course. Russian forces also have attacked support facilities. On March 18, Russian cruise missiles damaged the State Aircraft Repair Plant in Lviv, in western Ukraine. That facility overhauls MiG-29s. We don’t know how many MiG-29s Ukraine got from its donor or donors. Maybe Poland transferred all 28 of its old, Soviet-made MiGs, which the country is replacing with new F-35 stealth fighters from the United States. Maybe Bulgaria donated all 15 of its MiGs. Maybe Slovakia sent its 12 MiG-29s. Bulgaria and Slovakia both are replacing their Soviet-made fighters with American-made F-16s.
Click to expand...

Communication avionics will need to be swapped out. And sources for aviation fuel are also critically important.

Big kudos to the countries that stepped up here. Are any more helos avaiable?

Communication avionics will need to be swapped out. And sources for aviation fuel are also critically important.

Big kudos to the countries that stepped up here. Are any more helos avaiable?
Click to expand...

Hmm… I suppose this means that the traffic light color for sending ‘offensive’ weapons into Ukraine has changed again.

ttwtt78640 said:
Hmm… I suppose this means that the traffic light color for sending ‘offensive’ weapons into Ukraine has changed again.
Click to expand...