The RNC was pure propaganda designed to sanitize

The RNC was pure propaganda designed to sanitize Trump's damning record on race, immigration, women, and the pandemic 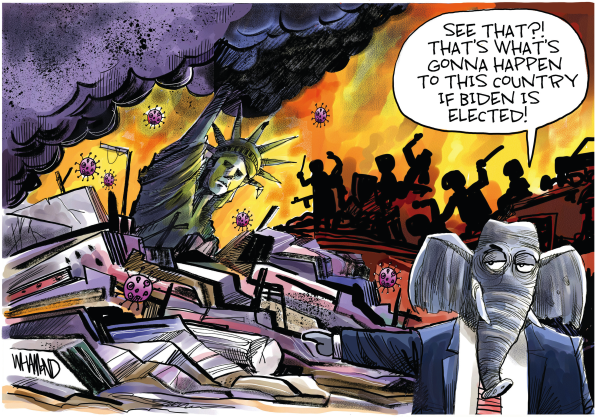 8/27/20
The 2020 Republican National Convention painted an alternate reality for the country, portraying President Donald Trump as a tolerant, levelheaded leader who acted swiftly to contain COVID-19. During his speech on Thursday, Trump said his administration is focusing "on the science, the facts, and the data" to handle the pandemic. This couldn't be further from the truth. Roughly 1,500 people gathered on the South Lawn of the White House for the final night of the convention and Trump's address. They sat in chairs that were not six feet apart, and many of them were maskless. It sent a message that everything is fine in the US, even as the virus continues to spread at an alarming rate across the country. Over 180,000 Americans have died from the virus. Millions are unemployed. But these devastating stats were consistently ignored during the convention, which almost made it seem as if the pandemic is over. Donald Trump Jr. on the first night of the RNC praised his father's handling of the pandemic, stating that he "acted quickly and ensured ventilators got to hospitals that needed them most, he delivered PPE to our brave frontline workers, and he rallied the mighty American private sector to tackle this new challenge."

But this is far from how things played out in reality. Trump has repeatedly downplayed the threat of the virus, pushed against expanding testing, and misled the public on the state of the US outbreak. Public health experts have slammed Trump's handling of the pandemic, and polling has consistently shown the vast majority of Americans disapprove of his response to the outbreak. The convention was well-coordinated effort to sanitize Trump's damning record on an array of issues, from his handling of the pandemic to his treatment of women. The RNC turned the White House into a campaign venue, exploiting the power and grandeur of the presidency to boost Trump's reelection prospects. To put it another way, it was propaganda for one of the most controversial presidents in modern US history as he fights for reelection after bungling his response to one of the biggest crises this country has ever seen. The basic message of the convention was inherently contradictory: The US is a nation consumed by chaos and only Trump can fix it — even though he's been president for three and a half years. Republicans succeeded in pulling off the convention without major mishaps, but they can't rewrite history and they can't erase the fact that the US is a nation in crisis under the current administration.
Click to expand...

Trump IS the current president. Whatever ails the nation now, and there is plenty, Trump owns it. The buck stops at HIS desk.

In case anyone is curious... *all* conventions for any party, including for a 1st term President looking for #2, are all propaganda.

Every single one of them, without exception.

All we are talking about is how far any single convention may go info fantasy land to make their points.

Rogue Valley said:
Trump IS the current president. Whatever ails the nation now, and there is plenty, Trump owns it. The buck stops at HIS desk.
Click to expand...

No, Trump is not your daddy. You know the situation with the virus, make your own decisions and stopping looking to the government to tell you what to do.

Regarding the looting, arson, and violence going on in liberal cities, that is the culmination of decades of leftism, and has nothing whatsoever to do with the federal government.

Trump IS the current president. Whatever ails the nation now, and there is plenty, Trump owns it. The buck stops at HIS desk.
Click to expand...

The DNC was pure propaganda designed to sanitize.

aociswundumho said:
No, Trump is not your daddy.
Click to expand...

Trump is the current president and has been the president for the past four years. Not Joe Biden

Trump is responsible for the condition of the US. That's how it has always worked, and that's how it works with Trump in the Oval Office.