The GOP’s 2018 Autopsy: Democracy Is Our Enemy

The GOP’s 2018 Autopsy: Democracy Is Our Enemy 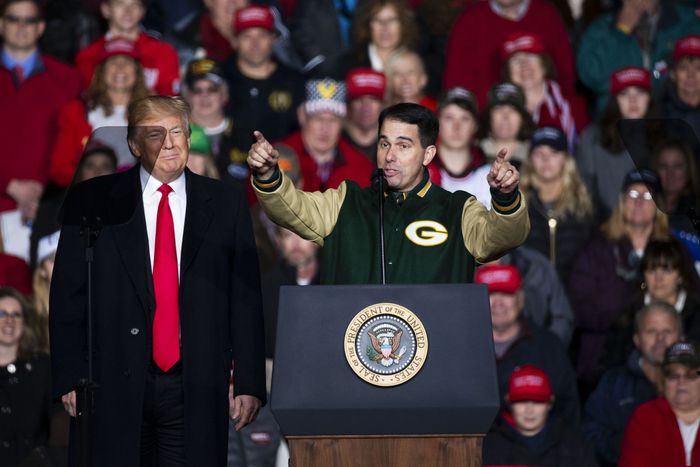 12/4/18
The Republican Party entered this year’s battle for House control with 22 seats to spare, a map gerrymandered in its favor to a historic (and arguably unconstitutional) degree, and the benefit of presiding over decades-low unemployment and robust economic growth. It left with (at least) 40 fewer members in the lower chamber, a popular vote loss of more than 8 percent, and the ignominious achievement of having forfeited more House seats in a single midterm than it had at any point since 1974’s post-Watergate bloodbath. The party has responded to this historic rebuke by rethinking … approximately nothing. And none of Trump’s Establishment rivals in 2016 (not Marco Rubio nor Jeb Bush) evinced any interest in pushing for the ideological changes (ostensibly) necessary to make the GOP a majoritarian party again. None called for Republicans to cease making tax cuts for the rich (i.e., one of the most universally reviled policy ideas in the United States) its top legislative priority, or to recognize the necessity of redistributive social programs in an era of stagnant middle-class wages and skyrocketing health and child-care costs. None dared challenge the GOP’s loyalty to the losing side of a culture war over reproductive rights, or its opposition to an even nominal response to the burgeoning climate crisis (a stance that might not be a great liability with the average Boomer, but is with the median millennial). And they did none of those things for the same reason that congressional Republicans aren’t doing any of them now, in the wake of historic midterm losses: The party is financially beholden to a donor class of reactionary plutocrats (who expect high returns on their political investments), and thus, is electorally dependent on Evangelical Christians and “racial conservatives” — which is to say, voters who are sufficiently alienated by America’s increasingly cosmopolitan cultural values to vote for Wyatt Koch’s material interests.

All this said, the Times’ claim that the GOP has neglected to mount any constructive response to its 2018 losses is manifestly unfair. Republicans heard the electorate’s message loud and clear — and in Wisconsin and Michigan, the party is doing everything in its power to muzzle that electorate, and nullify its verdict. The GOP might be losing ground with the public writ large. But it has retained (or, in some places, strengthened) its grip on low-density areas that enjoy wildly disproportionate representation at both the state and federal levels. In Wisconsin and Michigan, Republicans’ strength in rural areas — combined with heavily gerrymandered district maps — allowed the GOP to retain comfortable state legislative majorities in the midterms, despite receiving fewer votes in statewide races. In response to this outcome, the GOP’s legislative majorities in both states aren’t resting on their laurels, or resigning themselves to their newly limited authority. Rather, they’re using their lame-duck sessions to usurp a wide variety of powers from their states’ incoming Democratic governors and attorneys general. The Republican Party’s few bright spots on November 6 testified to the efficacy of these gambits: The conservative Supreme Court majority’s gutting of the Voting Rights Act enabled Brian Kemp to win Georgia’s governor’s race with the aid of voter suppression, while the Florida GOP’s success in formally disenfranchising more than 20 percent of the Sunshine State’s voting-age African-Americans allowed Rick Scott and Ron DeSantis to eke out razor-thin victories. All of which is to say: The GOP does not have a plan for remaining electorally competitive in a democratic United States. But it doesn’t necessarily need one.
Click to expand...

The GOP Way. If you can't beat the opposition with better ideas, toss legislative grenades at the will of the people.