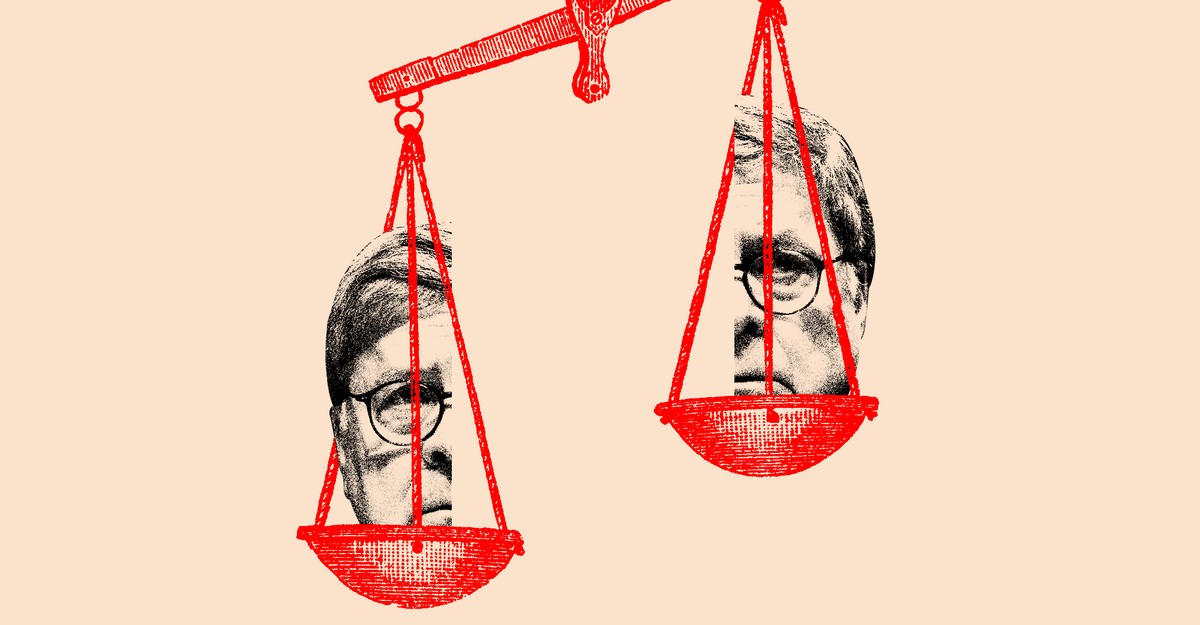 Bill Barr is convinced that the country is betraying its founding—and that it’s up to him to stop it.

9/24/20
Over the past 19 months, we have all heard a lot about Bill Barr’s misuse of the office of attorney general and the resources of the Justice Department to do the personal bidding of President Donald Trump, to undermine the evenhanded rule of law, and to work in countless other ways to put the president in a position of nearly autocratic power. This unprecedented pattern of conduct by the nation’s chief law-enforcement officer has brought a question to the minds of many people: Why does Bill Barr do the things he does? Barr’s better-known views relating to executive power posit that the Founders intended to create an all-powerful president, and he sees that vision as thriving until the late 20th century, when it was undermined by interference from Congress and the courts. To Barr, the role of religion in our public life has followed a similar trajectory. The Founders, according to Barr, believed that national success depended on America remaining a pious Christian nation, in which the worst inclinations of the citizenry would be constrained by obedience to God-given eternal values. That reality, he tells us, also substantially persisted until the late 20th century, when a combination of forces conspired to severely undermine it. The best recent source for his thinking on religion is a speech he gave at the University of Notre Dame last fall. The argument he advanced then is virtually indistinguishable from ones he has been making for many years in other speeches and in an article he published in the scholarly journal The Catholic Lawyer in 1995.

The crucial point for Barr is his claim that the thinking of the Founders, and therefore “the American government” they created, “was predicated precisely on this Judeo-Christian system” of values handed down by God. According to Barr, “the greatest threat to free government, the Founders believed, was not governmental tyranny, but personal licentiousness—the abandonment of Judeo-Christian moral restraints in favor of the unbridled pursuit of personal appetites. Barr is also telling the country a very big lie—a falsehood so bold, repeated so often, that it seems almost credible—about himself. Regularly for the past 19 months, Barr has been saying that his greatest concern has always been the protection of the rule of law and the equal application of the laws. He has claimed many times to be the one working to restore evenhanded justice from the supposed political abuses of the Obama administration and now even of the career prosecutors at the DOJ. Of course, the exact opposite is true. He is telling this lie in hopes of reaching the great majority of Americans who believe in the rule of law and want assurance that it is being protected. In this, there is a job for all Americans who care about the future. It is to tell everyone you know, in the clearest and strongest voice you can muster, that these claims are totally false, and that Barr’s devious campaign to restore his twisted vision of our history poses a grave threat to America as we know it.
Click to expand...

William Barr should not have been allowed anywhere near the levers of political power in Washington.

Similar to Donald Trump, Barr is also a malignant cancer on the US Constitution and Rule of Law.
D

Bill Barr is convinced that the country is betraying its founding—and that it’s up to him to stop it.

William Barr should not have been allowed anywhere near the levers of political power in Washington.

Similar to Donald Trump, Barr is also a malignant cancer on the US Constitution and Rule of Law.
Click to expand...