SHARIA UK: 'Nazi' Muslims in 'multifaith' Britain even poison their own kids!

The title is eyecatching but it's shockingly accurate as Imams and Madrassah schools are back in the news. A BBC undercover team has uncovered yet more extremism in the Islamic underworld.


It's time to Unite Against Fascism now isn't it Leftards.... Leftards?! {cavernous echo at this point}


And this isn't the first time there's been trouble with Government-endorsed Muslims, oh dear me no:

Dispatches - Undercover Mosque - Even TONY BLAIR endorsed this lot personally, with Lord Ahmed having links HIMSELF to this row of hornets' nests!

A thick seam of supremacy and hate: YouTube - What Muslims Want - Part 1/5 - And then they wonder why there's so much 'Islamophobia'!!

A TEACHER IS CALLED TO ANSWER FOR ALL THIS: 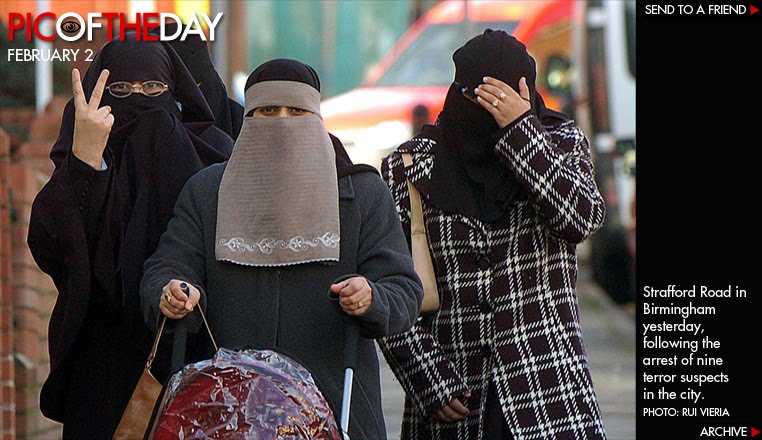 Whatever will moderate Muslims say? Or, as we can guess, what will they do...?

However did we get by without them in a multi-cultural, 21st Century, open and tolerant Britain?!
Last edited: Nov 22, 2010

And whatever would the Sun King propose to do?

Obama: "Islam has always been a part of America 's history."

He's ripe to step in!


Tthe BBC make a clumsy attempt to equate the problem on the same level as a handful of fundamentalist Christian cranks. But the plain fact that out of the hands of state schools, Muslim encampment schools supplied from the centre of the Islamic world breed hate, butchery and death wish - finding favour amongst the Koran-reading supremacist Muslim parenthood.

The programme itself concedes that the GROWING number of apartheid-minded Muslims (who perhaps might find life better back in the Islamic paradise) is the biggest problem than fundamentalist Jews or Christians.

And remember, whilst claims are made that this is a minority thing, Saudi Arabia is as much Islam's spiritual home and HQ as much as Russia was for Communism. And both ideologies threatened to plunge the world into darkness.
Last edited: Nov 22, 2010
N

Thanks for taking time to post this information and the links.

All over the world, especially in Europe and America, Islam is gaining ground. And where Islam itself isn't taking root, vicious anti-Israel and anti-Jewish ideology has been absorbed and is manifesting on college campuses, in religious and social groups, and even in mainstream news media.

A strange fascination with Fascism, and a widespread adoption of Fascist ideology is showing itself. Forget the slogans about "Left" and "Right" politics - the Communists were just as Fascist as the Nazis. The obsession with power, control, and wealth combined with a pathological disregard for others has once again started moving in the world.

What's driving all this? A primary cause is found in Saudi-American-British oil money and age-old grudges against the Jewish people. But the intelligence agencies of almost every political entity on the planet are also involved. There's plenty of reason to be concerned about what's going on, and it's a mistake to continue ignoring what's happening.

An American researcher named Dave Emory has spent the past 40 years documenting and reporting on the underground Nazi networks that, in recent years, have started showing themselves more openly. A wealth of material can be found at the spitfirelist.com website, including PDFs of out-of-print books written just before and not long after the end of WWII. In particular, the book Martin Borman: Nazi in Exile by journalist Paul Manning deserves a careful read.

For those who're just now starting to learn about the connections between Islam and Nazism, Emory's program titled Mein Jihad: Islamofascism and Geopolitics is a good place to start.

And thank you for the feedback. If all of us worked a little to put the truth out there (as these DP links get posted elsewhere), we can each have a few more people awake.
You must log in or register to reply here.
Share:
Facebook Twitter Reddit WhatsApp Share Link
Top Bottom