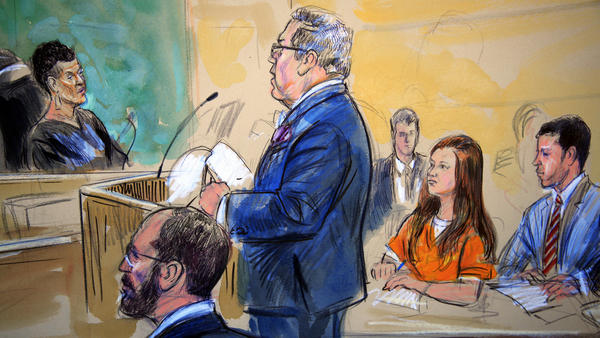 12/123/18
A Russian gun rights activist pleaded guilty Thursday to conspiring with a senior Russian official to infiltrate the conservative movement in the United States as an agent for the Kremlin from 2015 until her arrest in July. Maria Butina, 30, became the first Russian national convicted of seeking to influence U.S. policy in the run-up and through the 2016 election as a foreign agent, agreeing to cooperate in a plea deal with U.S. investigators in exchange for less prison time. Butina admitted to working with an American political operative and under the direction of a former Russian senator and deputy governor of Russia’s central bank to forge bonds with officials at the National Rifle Association, conservative leaders, and 2016 U.S. presidential candidates, including Donald Trump, whose rise to the Oval Office she presciently predicted to her Russian contact. “Guilty,” Butina said with a light accent in entering her plea with U.S. District Judge Tanya S. Chutkan at a hearing Thursday morning in federal court in Washington. As part of her plea, Butina admitted seeking to establish and use “unofficial lines of communication with Americans having influence over U.S. politics” for the benefit of the Russian government, through a person fitting the description of sanctioned Russian central banker Alexander Torshin, prosecutor Erik Kenerson said.

Butina’s case is a vivid “part of larger mosaic of Russian influence operations” laid out in part by special counsel Robert S. Mueller III’s investigation of Russian interference, said David Laufman, former chief from of the Justice Department’s National Security Division’s counterintelligence section from 2014 until earlier this year. Butina and Torshin invited NRA leaders to Moscow in December 2015, a delegation that includedDavid Keene, a former NRA president and past head of the powerful American Conservative Union. Documents reviewed previously by The Washington Post show the group met with Russian Foreign Minister Sergei Lavrov. After the meeting ended, Butina sent Torshin a message: “We should let them express their gratitude now, we will put pressure on them quietly later.” Butina, who has been jailed since her arrest in July, agreed to remain behind bars pending sentencing. The court did not set a sentencing date pending Butina’s ongoing cooperation with prosecutors but set another hearing for Feb. 12 on the status of her case.
Click to expand...