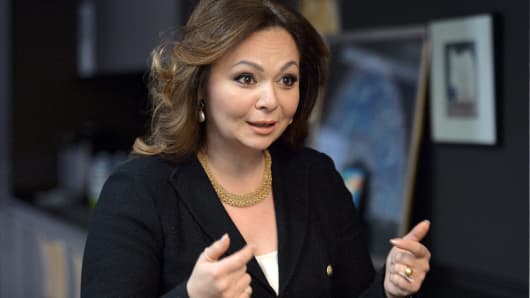 1/8/19
Natalia V. Veselnitskaya, the Russian lawyer who in 2016 met with Trump campaign officials in Trump Tower, was charged on Tuesday in a separate case that showed her close ties to the Kremlin. Ms. Veselnitskaya, a pivotal figure in the investigation into Russian interference in the presidential election, was charged by federal prosecutors in New York with seeking to thwart an earlier Justice Department investigation into money laundering that involved an influential Russian businessman and his investment firm. The money-laundering case was not directly related to the Trump Tower meeting. But a federal indictment returned in Manhattan seemed to confirm that Ms. Veselnitskaya had deep ties to senior Russian government officials. The charges stem from the Justice Department’s 2013 civil investigation into the role that some of Ms. Veselnitskaya’s clients — Prevezon Holdings Ltd. and its owner, Denis P. Katsyv — played in a scheme to launder ill-gotten money through New York real estate purchases.

The Justice Department asked the Russian government to assist its investigation, but the Russians refused, responding with a letter that purported to exonerate Russian officials and Prevezon, the indictment said. The indictment says Ms. Veselnitskaya secretly cooperated with a senior Russian prosecutor in drafting the “intentionally misleading” response, then filed it in federal court in Manhattan. “In doing so, Veselnitskaya obstructed the civil proceeding,” the indictment said. She is charged with one count of obstruction of justice. Ms. Veselnitskaya, 43, is believed to be in Russia, according to the United States attorney’s office for the Southern District of New York, which moved to unseal the indictment on Tuesday. The office gave no indication that it expected her to be sent to Manhattan to face charges. The new indictment again raises questions about whom Ms. Veselnitskaya was representing when she met with Donald Trump Jr., Jared Kushner and Paul Manafort, all senior Trump campaign advisers, at Trump Tower in Manhattan.
Click to expand...

A Kremlin lawyer, money-launderer and court obstructionist. Invited to Trump Tower in June 2016 to chat with Don Jr. and Jared Kushner about (wait for it).... adoptions! :lamo