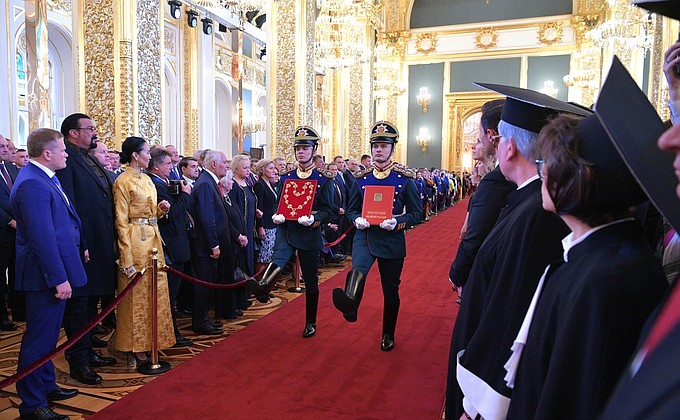 12/27/18
The speaker of Russia’s parliament raised the possibility of changing the constitution as speculation grows that the Kremlin is considering ways to allow President Vladimir Putin to remain in power beyond the end of his current term, when current law requires him to step down. “This is about the transfer of power,” said Gleb Pavlovsky, a political analyst and former Kremlin aide. “Putin encourages this game, dropping ambiguous hints. The comments from Vyacheslav Volodin, speaker of the State Duma and a top member of the ruling party, at a scripted Kremlin meeting with Putin late Tuesday were vague and didn’t mention succession. But analysts said they showed the authorities already are preparing the ground for changes before the end of Putin’s current term in 2024. “There are questions in society, esteemed Vladimir Vladimirovich,” Volodin said, addressing Putin in the respectful form, according to a Kremlin transcript. “This is the time when we could answer these questions, without in any way threatening the fundamental provisions” of the constitution, he added. “The law, even one like the Basic Law, isn’t dogma." The official transcript doesn’t include any mention of Putin’s response to Volodin’s proposal. The Kremlin’s tight control over the political system would make it easy to approve constitutional changes if Putin backed them.

Political analysts and government insiders have been discussing the possibility of constitutional changes for months as the focus on the end of Putin’s term grows. Putin, now 66 years old and apparently healthy, has suggested he doesn’t plan to stay beyond that time, but few see a suitable replacement for the man who has ruled Russia virtually unchallenged for the last 18 years. “The general sense is that there’s no one to replace Putin as the guarantor of the system,” said Valery Solovei, a political scientist at the Moscow State Institute for International Relations. “None of the potential candidates is in a position to maintain the ‘sacred ties’ to the people. So the best option is seen as a change in the configuration of the government to ensure Putin remains the center of decision making." Among the hypothetical possibilities would be to elevate an advisory body called the State Council to become the supreme authority with Putin at its head, according to analysts. The presidency could remain, but stripped of many of its powers, Solovei said. Other options also are possible, he noted, saying the process of amending the constitution could begin in 2020.
Click to expand...

Putin has been the de-facto dictator of Russia since 2000. Constitutional term limits? No problem.

The super-majority rubber-stamp parliament can simply alter the Constitution. Another example of how the law is manipulated in Putin's Russia.

A Constitution made of Spandex and disrespected.

I would be worried about the idea being put in Trump's mind if he had a real chance at reelection. At least more than once. i'm still hoping the dems come up with a moderate I can vote for.

Putin has been the de-facto dictator of Russia since 2000. Constitutional term limits? No problem.

The super-majority rubber-stamp parliament can simply alter the Constitution. Another example of how the law is manipulated in Putin's Russia.

Is that Steven Seagal far left second from the end? Looks like to me and I know he's been a frequent visitor to Russia.

EnigmaO01 said:
Is that Steven Seagal far left second from the end? Looks like to me and I know he's been a frequent visitor to Russia.
Click to expand...

Very observant of you. Yes. Seagal has taken Russian citizenship.