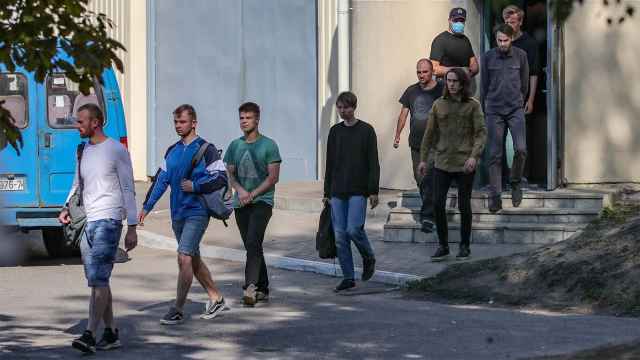 8/14/20
The main challenger in Belarus's disputed presidential election called for mass weekend rallies and workers were walking off the job on Friday as defiance mounted against strongman leader Alexander Lukashenko. In a video address to supporters, Svetlana Tikhanovskaya accused Lukashenko's regime of a "bloody massacre" in a crackdown on post-election protests, as people detained during the demonstrations began to emerge from jail with harrowing accounts of beatings and torture. Crowds of workers started to heed calls from the opposition to walk off the job. AFP journalists saw hundreds of employees gathered in uniforms and hardhats outside the Minsk Automobile Plant (MAZ) and the Minsk Tractor Works (MTZ). Calls were growing for international action, with Germany throwing its weight behind a drive to level sanctions against Belarus ahead of a meeting Friday of European Union foreign ministers. "Belarusians will never want to live with the previous government again. The majority do not believe in his victory," said Tikhanovskaya, who left the country for neighboring Lithuania on Tuesday. "I ask the mayors of all cities to organize peaceful mass gatherings in every city on Aug. 15 and 16," she said.

Detainees emerging from a detention center in Minsk told AFP they had been beaten and deprived of food, water, sleep and medical care. "They burned my hands with cigarettes," said Maxim Dovzhenko, 25, who insisted he had been detained even though he was not taking part in protests. "They hit me on the head, I am not feeling well, my head is spinning," he said before being taken to hospital. Mikhail Chernenkov, a 43-year-old entrepreneur, said he was given electric shocks and beaten with sticks in a police station, showing AFP his bruised buttocks. "This is torture," he said, adding that like many others he was forced to sleep outside because cells were overcrowded. He also said he did not take part in the protests. Hundreds of friends and relatives were waiting outside the detention center, where volunteers were handing out food and blankets. In a statement, Amnesty International condemned "a campaign of widespread torture and other ill-treatment by the Belarusian authorities who are intent on crushing peaceful protests by any means."
Click to expand...

Beatings and torture will continue as long as Lukashenka believes it will be effective.

If his thuggery gamble does not pay off, Lukashenka may flee to sanctuary in Russia. But I believe Putin would intervene militarily before it reached such a point.