No Russian ever called me deplorable

This review will contain spoilers, you’ve had 40 years to see the movie, if you want to see it it’s free on YouTube movies


This is an obscure movie today, in fact I only watched it because it was free. It was made from Clive Cussler’s 1976 novel of the same name. This movie was not a commercial success, it costed 40,000,000 dollars to produce and only brought in $7,000,000 at the box office. It has a 38% rating on rotten tomatoes and was largely overshadowed by other movies, although it was commercially panned, I think it is actually an ok movie especially since you can see it for free.

The movie begins in a tundra, there’s no titles explaining where it is, but it’s later discussed to be an island in Arctic sea near Siberia, a man digs his way into an abandoned mining shaft to find a grave with a dead American miner and a note. Later on this man is rescued from Soviet forces by Dirk Pitt (the protagonist of Cusslers novels) and returned to America. We learn that this island had a rare mineral needed for a “Star Wars” type missile defense system. In the next two hours the plot is basically that the government finds the archives of this old American mining project, they found out the mineral was smuggled out of Russia and to England where it was loaded on the RMS Titanic for the fateful voyage to America, the US Navy after some mishaps manages to salvage the Titanic, the Soviet Ambassador learns of the project and tries to prevent the ship from being salvaged, but in the end the ship is brought under tow to New York (to massive fanfare) and dry docked, the cargo hold is examined and there’s no super ore in the hold. Pitt surmises that actually the material they’re seeking was deposited in a graveyard in a fictional English village in Cornwall before the ship sailed on the doomed 1912 voyage. At the end Pitt and the project director for the missile defense program decide to not tell their superiors about the mineral for fear it will destabilize US-Soviet relations as credits roll

The movie was actually better than I thought it would be given the fact of its commercial flop. There’s a few gripes I have with it, the audience is never introduced to Dirk Pitt until he shows up in the movie, his background isn’t discussed other then cryptic references to being a captain in the navy (he looks too young to be a full bird rank) so you are questioning why he’s so involved in a classified operation and what exactly his specialty skills are. the Titanic is found in one piece when he know it broke in two (in fairness the wreck wasn’t yet discovered in 1980) the means of raising the ship seems silly, as does the fact that they are walking in the ship after salvaging it which I think would be very dangerous.

That said despite the faults is a fun movie to watch with a beer and popcorn. And it’s free. I would give it 3/5 if you like 80s thrillers 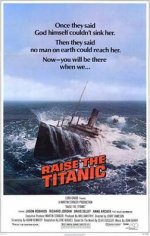 I read the book, and remember it to be fascinatingly intriguing. The movie I didn't see, because the critics at the time said it was slow moving and not as interesting as the book. The book now is dated, as we know that the ship really broke in half ---- ripping the bottom off. And the rear section imploded due to sinking quickly and trapping air inside. There is no way the ship could be raised as suggested. But it was a cool thought.
You must log in or register to reply here.
Share:
Facebook Twitter Reddit WhatsApp Share Link
Top Bottom