3.31.22
Kaja Kallas has clear memories of the Soviet occupation. She was a teenager when Estonia became independent, and she remembers growing up before that with empty shop shelves, a passport that would not allow her to travel to countries outside the Eastern bloc, and a chilling atmosphere that kept people from speaking freely outside their homes. She also remembers the stories about the harsher deprivations—deportations, imprisonment— that her parents and grandparents faced. So now that Kallas is Estonia’s Prime Minister, it makes sense that she has become one of the most vocal advocates for taking an unyielding stance against Putin. “If Putin wins, or if he even has the view that he has won this war, his appetite will only grow,” Kallas, 44, said in late March. “And that means he will consider other countries. That’s why we have to do everything we can to stop him now.” Like other countries in the region, Estonia has had painful experiences with Russian oppression. It has since become one of the fastest-growing economies in Europe. But it has never relinquished its mistrust of its powerful neighbor to the east, with whom it shares nearly 200 miles of border.

Although she hesitates to point fingers, Kallas admits that among the leaders of formerly occupied countries, the Russian invasion of Ukraine has triggered a certain sense of ‘we told you so.’ Since the Russian invasion, Kallas says Western allies have come closer to the Estonian point of view. “Before there were many who were watching this through the lens of democratic world, ” she says. “But what I was saying then, and what I think is clear now, is that [Putin] is a dictator. He doesn’t care for people’s opinion. He doesn’t care that he’s hurting his own country.” That devastation not only convinces her that everything must be done to help Ukraine now, but also reminds her of her own country’s past. “Every family in Estonia has a history of how they suffered during the Soviet times, due to the deportations, to the killings, to the shelling of towns. So when you see that in 2022 in Mariupol they’re deporting people from their homes,” she says, “it just brings all the very painful memories back of something that you thought would never again be possible.” As a tiny country with a vivid memory of the violence committed against it, she believes Estonians, who have already welcomed 25,000 refugees, have a clear-eyed view of what Ukraine is suffering.
Click to expand...

Unlike the Warsaw Pact countries, Ukraine, Lithuania, Estonia, and Latvia were all SSR's... integral republics of the Soviet Union.

Unlike the Warsaw Pact countries, Ukraine, Lithuania, Estonia, and Latvia were all SSR's... integral republics of the Soviet Union.
Click to expand...

Yep, and they’ve got their own problems with celebrating Nazi collaborators, funnily enough. For example.... 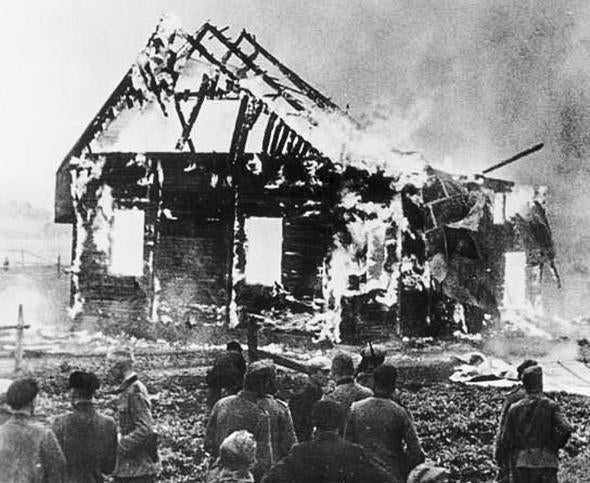 I met Yitzhak Arad in the cafeteria of his upscale retirement home outside Tel Aviv. To his enemies, this short man, softened by age and bundled in...

Unlike the Warsaw Pact countries, Ukraine, Lithuania, Estonia, and Latvia were all SSR's... integral republics of the Soviet Union.
Click to expand...