Putin says rap should be controlled in Russia, not banned

Putin says rap should be controlled in Russia, not banned 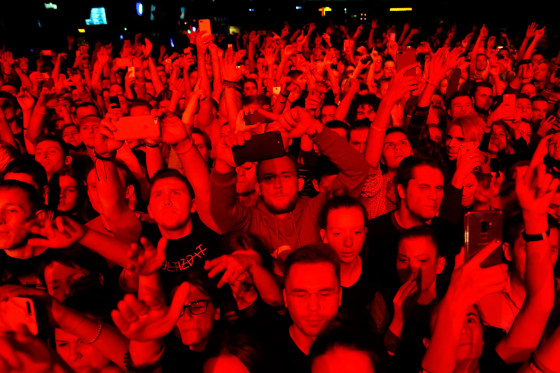 12/16/18
MOSCOW — Alarmed by the growing popularity of rap among Russian youth, President Vladimir Putin wants cultural leaders to devise a means of controlling, rather than banning, the popular music. "If it is impossible to stop," he said at a St. Petersburg meeting with cultural advisers Saturday, "then we must lead it and direct it." Putin noted that "rap is based on three pillars: sex, drugs and protest." But he is particularly concerned with drug themes prevalent in rap, saying "this is a path to the degradation of the nation." Putin's comments follow a spate of concert cancellations by venue owners and local authorities across Russia and the brief arrest of a popular rap artist, Husky. The crackdown has sparked considerable discussion in recent months, especially among young people, and evoked Soviet-era censorship of the arts. Last month Husky, whose videos have garnered more than 6 million views on YouTube, was arrested after he staged an impromptu performance when his show was shut down in the southern Russian city of Krasnodar.

The 25-year-old rapper, known for his lyrics about poverty, corruption and police brutality, was preparing to take to the stage on Nov. 21 when local prosecutors warned the venue that his act had elements of what they termed "extremism." On Nov. 30, rapper Gone.Fludd announced two concert cancellations, citing pressure from "every police agency you can imagine," while the popular hip hop artist Allj cancelled his show in the Arctic city of Yakutsk after receiving threats of violence. Other artists have been affected as well — pop sensation Monetochka and punk band Friendzona were among those who had their concerts shut down by the authorities last month.
Click to expand...

Russia is currently in the throes of an HIV epidemic. The regime frowns on any medical assistance that may benefit the homosexual community. Drugs? The Putin regime has done little to stem the tide of Krokodil (the "Zombie Drug") which is more addictive than morphine and literally eats the skin away wherever it is injected. Poverty? That is everywhere in Russia outside of the Moscow and St. Petersburg metro areas. The regime certainly wants no appealing and pointed messages of its widespread corruption and police brutality via rappers. The Putin answer -- shut it down (control). No radio play, cancel concerts, and arrest/rough up the artists.

Putin seems to be the kind of guy who would ban the beetles albums from selling in Russia.

Unitedwestand13 said:
Putin seems to be the kind of guy who would ban the beetles albums from selling in Russia.
Click to expand...

That was 15 years ago. Putin was still in his first [legal] term and had not solidified his power yet.

we're in an era of dictators and wannabe dictators. we'll get past it.

Maybe that's why Trump and his Trumpsters are such big fans of Vlad.. I don't think many of them are fans of rap.

A matter of expediency no doubt.

Answering Sir McCartney’s question whether the Beatles’ music was banned in Soviet times, Mr Putin said there was no ban on it, but many things were over-ideologised, and the Beatles’ trend did not fit into Soviet ideology. That was the reason why in the 1980s the official authorities did not allow Paul McCartney to hold a concert on Red Square.
Click to expand...

Aren’t the beetles popular amongst the Russian generation that grew up in the 70s and eighties?

Unitedwestand13 said:
Aren’t the beetles popular amongst the Russian generation that grew up in the 70s and eighties?
Click to expand...

Sure, but they're not the ones we're talking about here, are they?

Putin Clamps Down On Rap Music in Russia

Can't have things critical of the regime now can we?

Media? Controlled. Hardly any independent media left. Internet? Websites are monitored and have to turn over all requested private info to Russian security services. Blogs? If more than 3,000 visitors a month, they must register with the government. NGO's? They must register as foreign agents. Religions? All are monitored except the Russian Orthodox Church. Jehovah Witness is classified as "extremist". Protests? Must obtain government permission. Opposition candidates? Activist Boris Nemtsov was assassinated and activist Alexei Navalny was banned from running. And now rap music is "extremist" and must be controlled.

This is "Putin democracy". Neighbors want nothing to do with Putin's pariah state.

Putin made it very clear he wants the bring back the USSR. And that's exactly what he is doing.

Years ago Cons and Republicans would have been outraged by the thought of another USSR. But now Trump's Republican Party rather be Russian.

Live at the Glastonbury Music Festival 2004

Unitedwestand13 said:
Aren’t the beetles popular amongst the Russian generation that grew up in the 70s and eighties?
Click to expand...